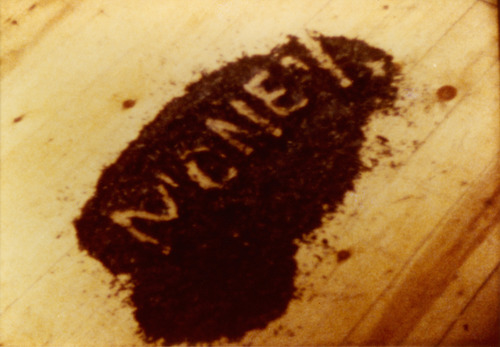 During several of his early performances, Jan Fabre attempts to make his mark on art history, critically reflecting on the work of art as commercial commodity.  He also casts a critical eye on the art world's prevailing laws, and charts the ambiguous position occupied by money within our contemporary society.  In his very first performance - in reaction to art-school traditions - Fabre turns classical paintings upside down and clads them with a text reading: "You have to take everything seriously, but not tragically so."

When Jan Fabre, during the course of Money Performance, rips up, eats and finally burns the entry-receipts, the furious public storms the stage.  Also, with his The Rea(dy)make of the Money Performance, where the artist makes an exhibition with the money collected, and walks around in a suit made of money while stuffing the rest in his pockets, the public's reaction is less than enthusiastic.

At the opening of their exhibition The Essential Multiple, Jan Fabre and Erik Vermeulen ask members of the public for an entry fee.  A signed receipt is given, stapled and then handed back as a multiple made by the artists.  During the opening of an exhibition in Turnhout, Fabre goes around with a bag on his head that reads 'Buy at Jan Fabre'.

The same themes are again taken up during Jan Fabre's stay in the United States.  With After Art he investigates what it means it means to be a young artist on a public platform.  For The Killing of J.F.K., he shoots at a dollar coin bearing Kennedy's image.  The Creative Hitler Act sees Fabre explore the role of artist as dictator, and who as absolute ruler determines which language is to be used.  The relationship between artist and art critic is further examined in Art as a Gamble, Gamble as an Art.  When Fabre calls into question the critic's position within the world of art by symbolically torturing the philosopher Lars A. Mogensen with art-related attributes, a member of the public calls the cops.  On New York's Park Avenue, Fabre together with artist colleague Anson Seeno try to sell passers-by drawings on dollar bills and bags of salt as art works.  When his proposal to have art critics shoot at him in a manner of Russian roulette the organizers refuse, and Fabre's reaction to this results in his piece It's Kill or Cure. 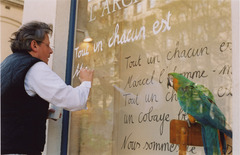