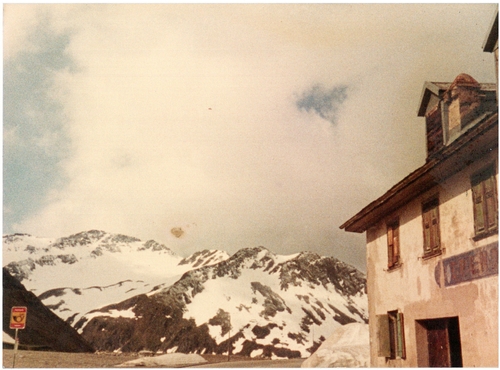 At Documenta V in Kassel, Swiss gallery owner Marc Hostettler from Neuchatel became acquainted with Panamarenko's work.   Via the auspices of architect Luc Deleu, in 1984 he invites Panamarenko to come and work in his studio located in the Furka Pass, where Joseph Beuys and James Lee Byars had previously also been guests. Panamarenko accepts the proposition, and subsequently would regularly return to the Furka Pass in the Swiss Alps.  The Furka Pass is located at an altitude of 2,431 meters, between the valley of the Upper Rhone and the Ursendal (Reuss river).  The house put at his disposal was an annex of the former Hotel Furka, a site that gradually disappeared into the abyss and was demolished.  The remaining outbuilding, on the other side of the road and lying at the Furka Pass's highest point, has sixteen rooms and two large garages that serve as artist's studios.  The building is only accessible during three months of the year; the rest of the time it is covered in snow.  The inhospitable nature of this area, however, was much to Panamarenko's liking.

'I could have also set up in a Tirolean hut along Lake Geneva, but still I opted for the extreme conditions of the Furka Pass.  Nothing much grows there, just some moss along with the rocks and snow and ice.  But when you're there, new inspiration comes easily.  It's the same at sea or in the Sahara.  It's mainly the contrast that's inspiring.  When you've spent the whole day ambling around, with all those abysses, those snow drifts and the wind, then it's an indescribable feeling to get back to your attic room in the evening to fiddle around with a little Archaeopterix while outside the storm rages.  That's... how would you call it?... Idyllic?'  - Panamarenko

When, in 1984, Panamarenko spends two months on the Furka Pass, he explores the neighboring mountains.  During one of his outings he comes across the wreckage of a jet airplane that had crashed across the Furka at Blauberg.  The following year he returned to the spot, but the airplane could not be found.

'Nevertheless I was on the same side of the Blauberg, or I thought so, but that mountain is very large and steep.  I had an ice pick with me and I had to cross a small ridge.  That took half-an-hour.  Below me was a steep drop-off of 45°, and I had to had to hug the mountainside and use the pick to slowly move along.  A feeling of unbelievable fear came over me.  I guess I'd been a little overconfident.  The most important thing when you're in the mountains is to be careful.  You can be afraid of everything, or fear nothing, and they're both equally dangerous.  You just have to always keep in mind to watch out.' - Panamarenko

Later Panamarenko acquires the lifelong use of this annex, and he would regularly pass the summer months there to make and develop new works.  In addition to some of his Archaeopteryxes, he also makes his first backpack flying devices, intended to fly from mountaintop to mountaintop.  These included the Green Backpack, the Silver Backpack, and a number of his pastille motors.  In order to ride around the mountains, he also made a caterpillar tracked tank that he christened Garage des Alpes, and a good while later the autos K2 and Thermo Photovoltaic Energy Convertor . 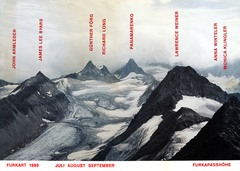 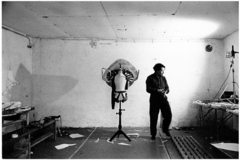 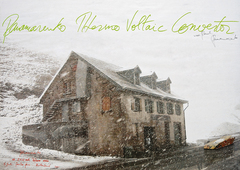