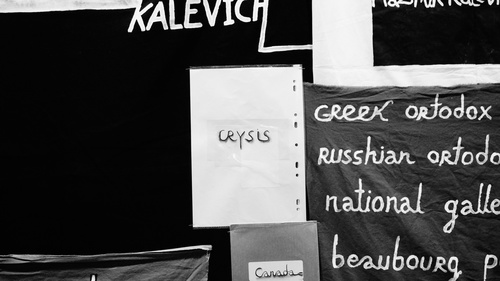 M HKA built up a substantial art collection from the former Soviet Union through earlier commitments in various movements, which can be used meaningfully within a Eurasian perspective. In 2016, to mark the Moscow Biennale, the collection was enhanced by this collection: Euro-Asiatic art with an emphasis on performativity and social-critical ardour. The collection was expanded with two films by Evgeny Granilshchikov. Work by Babi Badalov was also purchased. Iam euromental (2015) experiments with words, combining languages and images of different cultures. An installation was also acquired from Alevtina Kakhidze. The Most Commercial Project (2010) is conceived on the theme of consumer culture. Kakhidze focuses on the tension in the relationship between desire and necessity by drawing the objects of her desire and not only adding the price but actually giving them that price - as a permanent price. Welcome to BIRDHEAD World Again, Moscow (2015) was purchased from the Chinese collective Birdhead, which observes the city and its surroundings. Thanks to a structural collaboration with the V-A-C Foundation from Moscow, which had been supporting Russian contemporary art since 2009, the M HKA has been able to acquire Evgeny Antufiev's bulky Immortality Forever (2015) installation. Antufiev thematises his relationship with (Russian) folk culture. The installation focuses on the legendary dancer Anna Pavlova. He has also organised a sponsored exchange in which an entrance ticket to the exhibition entitled the customer to a discount for a Pavlova pie. And finally, the artist Victoria Begalskaya granted the screening rights to her film Aphrodite's Girdle (2014).

Further to various exhibitions in the M HKA, works by important national and international artists were purchased with a clear socio-political dimension. TREMOR, RUMOUR, HOOVER (2001), for example, was purchased from Huseyin Alptekin. It is 'plastic art' that reflects the prosaic material qualities of the 'global clutter' brought about by the flow of transnational free-market capitalism. Highly subjective puns are placed in a cheap-and-cheerful billboard signalling system. One of the textile works from artist Otobong Nkanga was purchased on the occasion of her exhibition in the 'In Situ' exhibition series on the ground floor of the M HKA. Her work is about the relations between the earth's natural wealth and its exploitation by mankind. One of her central and ongoing concerns is the way intense, mineral extraction is inextricably linked to capitalism. A large installation Holy Hauruck - der Maler und ihre Muse (2016) was purchased from Kati Heck, which she made especially for the double exhibition with Vaast Colson. The museum acquired Old Town Canoe (2015) from the latter by means of a donation from The Friends of the M HKA.

In 2016, the collection also grew of the international avant-garde from our region in the 1960s and 1970s, with an emphasis on performance and social-critical engagement. We managed to supplement the already considerable museum representation of Panamarenko in the collection with two scale models of imaginary vehicles that poetically depict the dream of flying under your own steam: Meganeudonen Reis naar de sterren (Meganeudons Travel to the stars). The purchase of Daniel Dewaele's work, Kunst tegen werkloosheid (Art against Unemployment 1979), should also be seen in this light. And Danny Matthys once again donated a large number of his older photo works to the M HKA this year. The Danny Matthys collection has gained further importance as a result. This year, discussions were also started about the legacy of artist Hugo Roelandt, who was one of the pioneers of performance art in Belgium in the 1970s and 1980s. Hugo Roelandt donated part of his estate to the Royal Academy of Antwerp. His partner, Lydia Van Loock, and the Academy decided to preserve all of the artist's archives as a research platform on the artist and performance art in Belgium and to donate it, in turn, to the M HKA. M HKA also committed itself to the work of journalist, essayist, painter, draughtsman, performer and conceptual artist Jef Lambrecht and was able to acquire some of his reference works by donating them.

Works of art were also acquired from recent artists who have built on the avant-garde tradition. On the occasion of the exhibition ‘The Gap', curated by Luc Tuymans on abstraction within 20th-century and contemporary Belgian art, a work by Timothy Seghers was purchased. He redefines flatness with his pitch-black wall sculptures. Surfaces become black voids. These works create space, and are - at the same time - two-dimensional. Work by Maryam Najd was also acquired.

In 2016, the M HKA also purchased the first part of a large and long-term project from artist Danny Devos. Since the mid-1980s, Danny Devos has maintained correspondence with convicted serial killers in order to understand their motives. The Jockel project is a key work in Devos' oeuvre because the different aspects of his practice come together in this project. The framed letters refer to his correspondence. The four performances on the spot where the four victims were murdered connect his body art and performances with the project. The objects refer to his sculptures and installations.

In previous years, the core works around Paul De Vree's visual poetry were gradually placed in an international context, with additional graphics, sketches and films by various Italian visual poets with whom De Vree collaborated. Following a previous donation of a series of sketches and design drawings, the visual poet Sarenco donates seven newly reproduced works from the 1970s. As a result, the ensemble's collection of visual and concrete poetry has expanded and reinforced the international avant-garde from our region in the 60s and 70s, with an emphasis on social-critical commitment.

Other additions to the collection were works by Jonathan Meese and Jan De Lauré. The museum also acquired a number of smaller works, editions and multiples from various artists.

I Spy with my little Eye 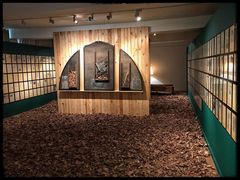