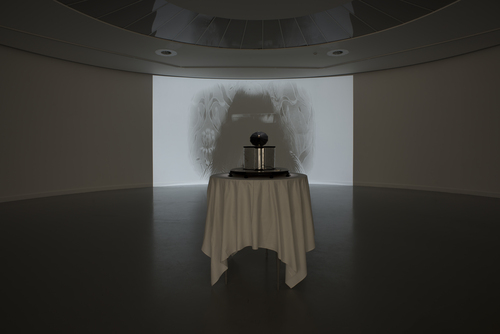 For this exhibition, the brothers Stephen and Timothy Quay (b. 1947) have specially constructed an octagonal viewing box or maquette with little mirrors in the shape of a case. An additional projection - a rehandling of a fragment from the animated short El Hotel Eléctrico (1908) by Spanish director Segundo de Chomón - serves as the exhibition's intertextual anchor. One scene, and then mainly a strand of hair from the film, makes a return in the maquette's design. Our gaze is directed by means of these small mirrors, by delineating the space around the object and then reflecting it in some sort of echo chamber. The viewer thus becomes a component of the optical scheme of the constructed setting.

The 'complicity' of the viewer is the most important recurring motif in the Quay's artistic strategies. The oeuvre of these American-born twins is a combination of graphic designs, stop-motion animation films, décors for opera and dance, and spatial installations in filmic, theatrical and museum spaces. Though natives of Philadelphia, their influences are mainly found in Central Europe. Since the 1970's they have continued to extend their own quirky, surrealistic universe, replete with references and visual quotes from art history. Fellow animators have also been influential (like Jan Švankmajer, Jan Lenica and Walerian Borowczyk), as well as the literary work of Franz Kafka, Bruno Schulz and Robert Walser, and the world of classical and contemporary music (Béla Bartok, Arvo Pärt, Karlheinz Stockhausen, Witold Lutoslawski).

The figurative work of the brothers Quay is a veritable pleasure to the eye, but its disorienting more abstract character is of equal importance, a process that they translate from their films to their installation pieces. 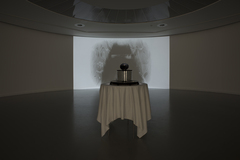 Click here to hear the Quay Brothers about their installation.

21 February 2014 - 11 May 2014.
What was lost when animation entered the field of cinema, and subjected itself to strict cinematic parameters? El Hotel Eléctrico went lookin