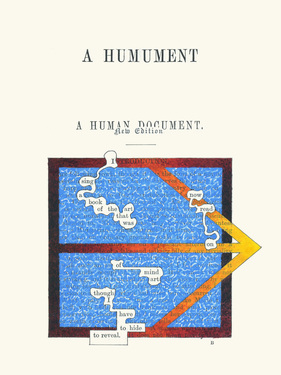 The artist writes, “I took a forgotten novel found by chance. I mined, and undermined its text to make it yield alternative stories, erotic incidents and surrealist catastrophes, which lurk within its wall of words. I replaced with visual images the text I’d stripped away. It began to tell, amongst other memories, dreams and reflections, the sad story of Bill Toge, one of love’s casualties.” Within this small format Tom Phillips has made the arts connect, bringing Wagner’s idea of “a comprehensive work of art” to pocketbook proportions. It is considered by many in the words of Bill Hurrell, the “defining masterpiece of postmodernism.”

Tom Phillips began work on A Humument in 1966. He bought the first threepenny novel he came across in a furniture repository on Peckham Rye, South London, where Blake saw his first angels. This was A Human Document by W. H. Mallock, a novel originally published in 1892. By 1973 the artist had reworked all its 367 pages by drawing, painting, and collaging over its text to create an entirely new ‘treated book’, a world complete with its own characters, visual and textual poetry and interweaving non-linear narratives. A Humument was first published in book form in 1980, and rapidly became a cult classic. Several editions, each with progressive revisions, have been published and in 2011 the artist created A Humument App with an interactive ‘oracle’ feature. This edition incorporates more than 80 new pages and now in its forty fifth year the project continues to be a work in progress. 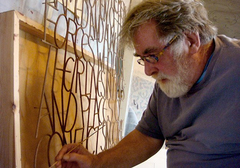