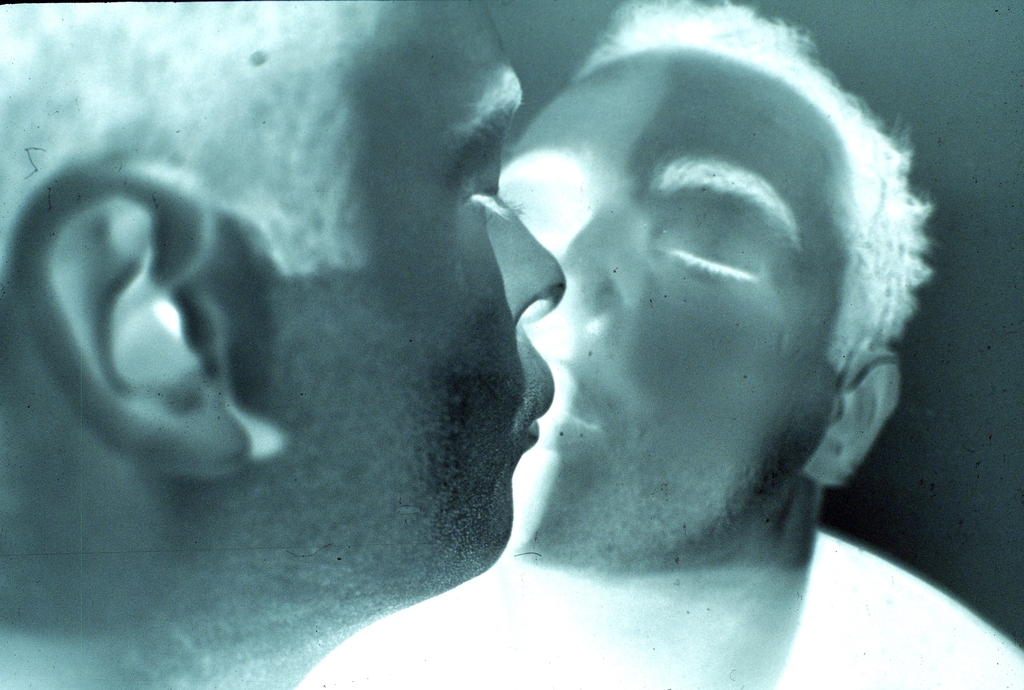 Self Portrait has as its subtitle Kissing with Scopolamine. It is one work from a series of three that the artist describes as ‘portraits with truth drugs’. The other two pieces have the subtitles Kissing with Sodium Pentothal and Kissing with Amobarbital. The series of slides documents three performances given successively at the Lisson Gallery in London, in the Van Abbemuseum in Eindhoven and in the artist’s own bedroom. In the performances, Gordon kisses three different persons on the lips, each time with another ‘truth drug’ on his own lips. The slide projections slow the images in negative. The description ‘truth drugs’ is an ironic commentary by the artist. The three medicines – scopolamine, sodium pentothal and amobarbital – are respectively an agent against nausea, a tranquilizer and a somnambulant. At one time or another they were said to encourage telling the truth, and made use of by various secret services. It seems, though, that these are fables, encouraged by films like True Lies with Arnold Schwarzenegger. The use of these so-called truth drugs in these portraits says nothing about the real relationship between the two persons kissing. In one of his interviews, Gordon says about the kiss: “A relationship that even never gets off the ground, just one kiss, can still have more impact than a relationship with someone you’ve been living together with for years.” Despite the x-ray-like close-ups and the use of ‘truth drugs’, the viewer ultimately remains in limbo regarding the true situation of the kissing pair. With this series Gordon offers a commentary on voyeurism in our society, the urge to want to see what you usually don’t get to see. Reality soaps like The Delivery are seen by him as examples of this urge. In this work we get to see everything, but in fact we are not any closer to ‘the truth’.

> Ensemble: The Unstable Self.