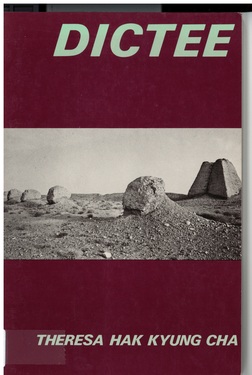 Dictée is the best-known work of the versatile and important artist Theresa Hak Kyung Cha. A classic work of autobiography that transcends the self, Dictée is the story of several women: the Korean revolutionary Yu Guan Soon, Joan of Arc, Demeter and Persephone, Cha's mother Hyung Soon Huo (a Korean born in Manchuria to first-generation Korean exiles), and Cha herself. The element that unites these women is suffering and the transcendence of suffering. Dictée is Cha’s evocation of the past through the apparatus of speech, told through the voices of the daughters of Mnemosyne, the Greek goddess of memory. It is a remembrance of the strength and resilience of women both fictitious and real and the history of the Korean diaspora community. Cha deploys a variety of texts, documents, images, and forms of address and inquiry to explore issues of dislocation and the fragmentation of memory. The result is a work of power, complexity, and enduring beauty.

Cha's interdisciplinary background is clearly evident in Dictée which experiments with juxtaposition and hypertext of both print and visual media. Instead of imposing one view, Cha made space for imagination in her artwork, as well as in her novel, and gave voice to others to discover their own stories. Cha’s vision frees us to re-imagine ourselves, our relationship to others and chart our own path home.