The Case of Distance Disengaged 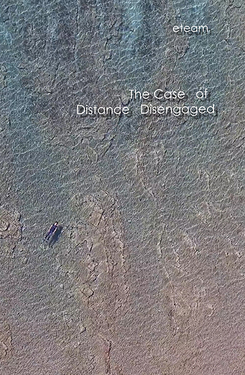 “The Case of Distance Disengaged takes the reader on a mesmerizing, poetic journey through the post-war Balkans, a region whose past and the not-yet of its future move closely alongside the present. Lucid and dreamy at once, Distance Disengaged follows visual and cultural clues in search of an an ever-elusive culprit: human perception. How do we see (this part of) the world? How do we see ourselves? How does (this part of) the world see us? Weaving together suspenseful adventure with exquisite cerebral meanderings, Distance Disengaged opens up new possibilities for historical narrative, storytelling, and documentation, ultimately leading the reader through a most satisfying investigation of the tangle of reality and perception.”

The novella was published on the occasion of Waypoint, Follow, Orbit, Focus, Pano, Track a solo exhibition by eteam at GMK Gallery in Zagreb, which contained a video, the novella, a photograph, paper mache sculptures, a floor mosaic and a wall text.

“The whole endeavor started with the artists visiting Croatia in an effort to research a peculiar camouflage design of Croatian military uniform which, in order to render a person concealed, incorporates the geographical mapping shape of Croatia itself. This intriguing issue, found by the artists through their initial online research, is in fact very much along the lines of eteam’s constant interest in disappearance, (in)visibility, land and its numerous uses in public and private contexts. In this project, the topics of disguise, appearance, absence and surveillance were further researched through eteam’s travel through Croatia and finally implemented through the exhibition featuring the video Waypoint, Follow, Orbit, Focus, Pano, Track, several paper mâché sculptures, a photograph and a novel The Case of Distance Disengaged. The visited locations, extensively presented in the book form as well as captured in the video, included a factory that makes military uniforms, then Liberland (a territory of the self- proclaimed nation on a small terrain between Croatian and Serbian border, which appears and disappears depending on the water levels of Danube river) and small Croatian islands – pieces of land that occasionally (dis)appear due to high tides of the sea. All of these stages were intertwined with daily anecdotes and casual meetings with people in urban and suburban surroundings that also influenced eteam’s observation of places and reflections on the topics mentioned.” 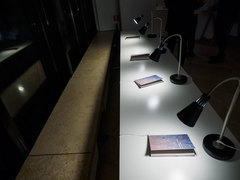 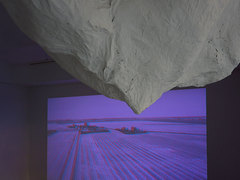 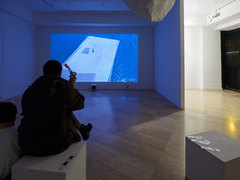 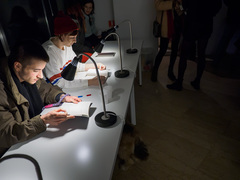