Ah Well - A Romance in Perpetuity & And to You Also 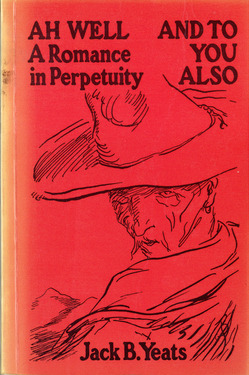 Ah Well is a story told by Dusty Brown, a character of indeterminate age, who is new in town. He may have lived there for many years; but, unlike most of the people in town, he had not lived there his entire life. It is an E-shaped town in a valley, with a river running through it and a fountain in its central square. We are never told the name of the town, but we learn quite a lot about the people who live there. There are young people, old people, and children, but no one seems to age. Brown never hears of a birth or of anyone dying a natural death. People leave town in two ways: they commit suicide or they get on their horse and leave.

And to You Also has as its main character Bowsie whom Yeats says he created to listen to him—“and he began to talk to himself, and even his back never looked like listening!” So the book might be described as a talking match between an author and his characters, who never listen to him.