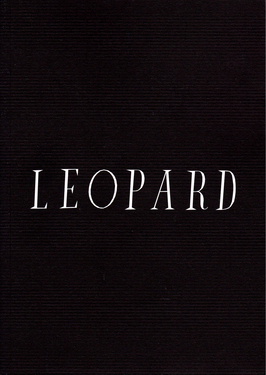 Leopard serves as the sequel to Antelope (both 2013). It follows the surviving members of a radical underground student theatre group over the course of the following summer. The group has been given the use of an old estate for the purposes of their private performances and their documentation. The performances pursue the crossing of a point of no return, often physical. The book is very violent and extremely sexual due to the fact that the book itself was housed within a polite abstract painting (see below). In a way it is without it’s ‘skin.’ The key scene involves the making of surgical videos where patients are awoken during open-cavity procedures to look inside their own carcasses. In the books’ climax the actors have an orgy aboard a private plane after which they intentionally let the plane run out of gas over the ocean. The story is told from within by multiple key participants and posthumously from the sole survivor as he navigates the fragmented archival footage and it’s cult status. Through it all the suggestion of a romance threads.

Leopard is an artwork that takes the form of a novel, that takes the form of the artist writing a novel and that takes the form of him telling people "I’m an author who wrote a novel". The content of the novel is closely aligned with the pieces of text one often finds in Matthew Brannon's prints and in the titles of his artworks. The novel complicates, and occasionally generates, the sculptures and prints that Brannon made and vice versa. The artist does not see the book as a key to the other artworks, however he does not discourage such investigations.

The novel Leopard was published in an edition of 8. Each copy was inserted by way of a brass fitting into the side of a larger abstract painting. Of the eight paintings, six were shown as part of the exhibition Leopard  at David Kordansky Gallery in November of 2013. The exhibition's ‘secret’ name was Airplane at the Bottom of the Ocean (Five Impossible Films II). Due to gallery’s objections on commercial grounds this title was not made public. The novel Leopard was in addition turned into a split screen film, one half of which shows a young female art student reading the book to herself in real time – the other half the books contents scrolling upwards as if film credits. The film was shown on monitors in the center of the exhibition.

Edition of 8. Each copy of the novel Leopard was inserted by way of a brass fitting into the side of a larger abstract painting. Of the eight