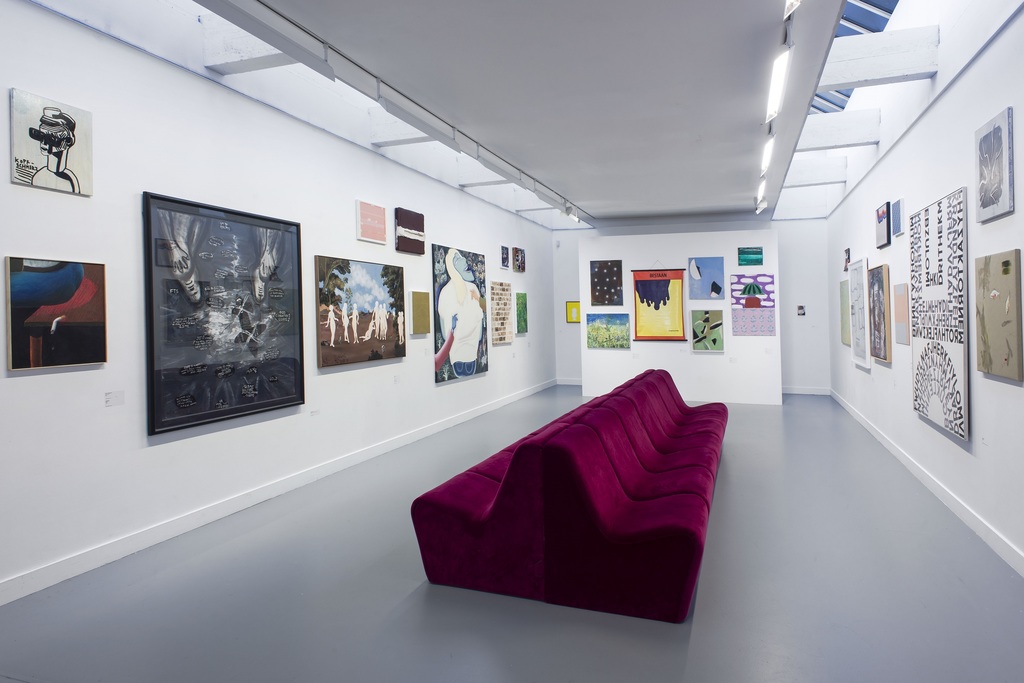 For those who were still in doubt: painting is thriving. In two M HKA spaces, the exhibition Salon de Peinture offers a picture of the current state of affairs, with more than fifty paintings by Belgian artists and foreign artists living and working in Belgium.

Lode Geens and Liliane Dewachter, who compiled the exhibition, do not strive for completeness.  Rather, they want to show the widest possible range and give a picture of the very diverse contemporary painterly practices existing today.

There's also a lot of young(er) talent on show, of which some already have a national or even international reputation, like Kati Heck, Kasper Bosmans and Ben Sledsens. Others are the proverbial 'young and up-and-coming', e.g. Sanam Khatibi, Anna Zacharoff, Tessa Perutz, or Gijs Milius. The latter are from Iran, Sweden, the United States and the Netherlands respectively, but they are working in Brussels. It is striking, incidentally, that the new names from Brussels only get noticed in Antwerp little by little, but the same goes for Antwerp artists in Brussels. In that respect, Salon de Peinture offers an interesting introduction.

There is also room for (re)discoveries: the partly abstract, partly figurative works by Ilse D'Hollander (1968-1997), which have received international praise in recent years, and the geometric abstract work of architect Alfons Hoppenbrouwers (1930-2001), to whose oeuvre the M HKA devotes a separate exhibition (19.01-05.05.2019).

It says a lot about the current boom in Belgian painting that it would take little effort to put together a second Salon de Peinture with fifty other painters.

In the 1970s and 1980s, painting was declared dead several times. At the time, the climate was not particularly favourable, in the sense that painters had little or no exhibitions in galleries and museums. Minimalism, arte povera, conceptual art, early video art, happenings and performances were in full swing: in a manner of speaking, Broodthaers, Beuys and Byars were setting the tone. Painters were chased away and regarded as perverts who were fudging with their paint in a messy studio, using a totally outdated bourgeois medium. After all, hadn’t everything already been ‘said’ in painting?

Moreover, the possibilities to exhibit were much more limited than they are today: S.M.A.K. and M HKA did not exist yet – although there were forerunners like ICC in Antwerp and the Society for the Museum of Contemporary Art in Ghent – and the gallery circuit was much smaller than today.

For the sake of clarity: painters kept on painting, even though they were only just keeping their heads above water. In the meantime, it sounds almost like a quip: from 1988 onwards, Luc Tuymans not only put painting on the map again, but also gave figurative painting a new élan. He practiced a new kind of ''history painting'', worked with the role of history and memory, and asked questions about the veracity of the (painted) image.

After the so-called 'Antwerp school' – Luc Tuymans and contemporaries like Bert De Beul and Guy Van Bossche – had produced a number of followers, afterwards, painting seems to have completely sprouted again, in such a way that much, yes almost everything is possible.

Currently, not a hundred but a thousand flowers flourish in painting. In these two rooms, you will see neo surrealism, fluo figuration and neo naïve art, everything from abstraction to figuration, from monochrome to geometric abstract, from pure aesthetics to 'bath painting', from social commentary to 'Art for art's sake'. Attention is paid to the landscape and man, to war and idyll.

As a source of inspiration, old masters such as Cranach, Botticelli and Van der Weyden are used, but comics and logos as well. You'll see how masters such as Walter Swennen, Fred Bervoets and Raoul De Keyser leave their mark in the work of younger painters.

The compact hanging, in several rows above each other, refers to the classic 18th and 19th century 'salons': annual official exhibitions that wanted to uphold the appearance of an abundant production from young artists. Hence the title of this exhibition. But make no mistake: the hanging was not done haphazardly! There are speaking confrontations or image rhymes, works that are connected by colour or style, motif or theme. And here and there, there's a hop, skip, and jump from monochromy to geometry.

> Ane Vester, Reconstruction of a Memory including a Book, 2016. Painting.