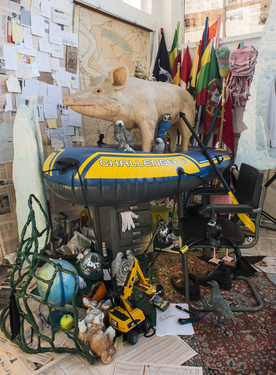 Dymphna escaping over sea with her confidant Gerebernus to mainland Europe is a key example of migration, a story in which many refugees will recognise themselves. Because of the violence, her kingdom has become unviable for her and so she flees abroad, ending up in Flanders, in the Kempen forests.

By migration we mean everything that has to do with people moving for personal, political, economic or ecological reasons. Migration is often seen as a one-off moment, but it can also be permanent and nomadic. Through the millennia, people have constantly migrated, so that humankind has spread all over the world. Transmigration originally meant large population movements. Today it is defined as taking a route – individually or as a group – and crossing multiple national borders to reach a final destination. Transmigration is therefore primarily associated with the problem of refugees. During wars and in conflict areas, migration often occurs under duress, as a deportation.

The art academy seemed to be the best location in Geel to find a home for the theme of migration. Art is about what-can-be-thought-differently and therefore about dealing with changes and shifts. That is what Tinka Pittoors expresses here with her title image. It is charged with the most diverse symbols, from the boat populated with animals to the flags that stand for national borders. Pittoors's construction primarily addresses a consciousness of a meaning that is floating, the essential mobility and changeability of signifiers.

It would take us to far to discuss here in detail what the works have to offer, each from its own perspective. In any case: some – like those by Babi Badalov, Aslan Gaisumov, Hiwa K and Johanna Kandl – are directly informed by concrete migration problems, others – like those of Luc Deleu, André Cadere, Almagul Menlibayeva or Ria Pacquée, and actually also Fransje Killaars's work – by a nomadic choice of being. But here, the actual core is perhaps the awareness of the relativity of one's own position, as can be seen in the works by Anne Daems, Berlinde De Bruyckere, Vanessa Van Obberghen and Loreta Visic.

Inge Godelaine, just like Visic a teacher at the academy of Geel, looks at what after many year has become of a life-size model of a modernist villa in Balen, a model that Jef Geys left behind in a favela during the biennial of São Paulo. Geys had hoped that it would become a school, but Godelaine can only capture some vague memories of a vanished moment. The 'moving' of people or ideas too – e.g. the museum works that Geys once brought into school as an artistic intervention – is only a moment in a continuum of change. 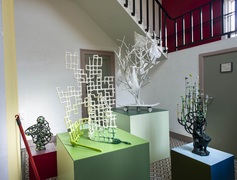 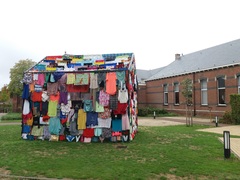 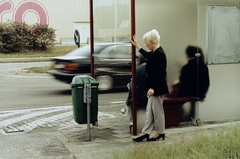 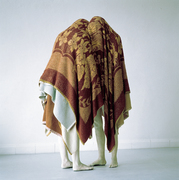 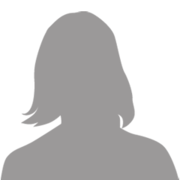 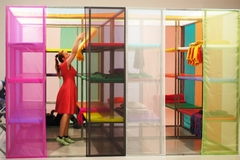 The video works for the theme Migration can be found on the first floor.

The works for the theme Migration that can be found on the ground floor.