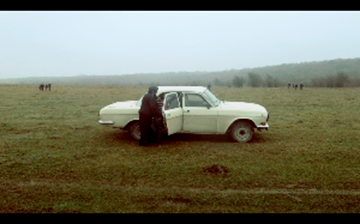 In 2017, the collection was enriched by the international avant-garde from our region in the 60s and 70s, with an emphasis on performativity and social-critical ardour. That is how the crucial collection of flux artist Ben Vautier, which the museum had kept in deposit since 1987, could now be acquired and secured. In previous years, the core collection of visual and concrete poetry was gradually placed in an international context, with additional graphics, sketches and films by various visual poets. In 2017, the museum acquired new work, i.e. digital visual poetry in the form of holograms by Alain Arias-Misson. The museum came to an agreement with poet/artist Wilfried Wynants that his collection of visual and concrete poetry, included in archives on the subject, in particular the legacy of Leon Van Essche - witness to the artistic scene around the Labris magazine - would be donated in full, with a view to making it accessible in a sustainable and phased manner in the future.

From the exhibition Urgent Conversations: Athens - Antwerp in Athens in 2016 and its continuation in Antwerp in 2017, which was set up in collaboration with EMST, EMST gave the M HKA a series of works by the Greek artist Bia Davou for long-term preservation. Drawing on her research into the social and communicative dimension of her artistic work, Bia Davou (1930-1996) has been designing a serial system of her art since the mid-70s. This serial method can be applied in an infinite number of ways, through drawings, paintings, embroideries on grid or flat paper, on bricks, jute, etc. In exchange, M HKA gave two works by Danny Matthys on long-term loan, the monumental 'Vivre d'Abord' (1979), and Brabantdam, 59, Gent downstairs upstairs (1975).

Research into what was shown in the avant-garde rooms in our region resulted in specific additions and the acquisition of some underground oeuvres, such as the legacy of artist Hugo Roelandt, who was one of the pioneers of performance art in Belgium in the 1970s and 1980s. Hugo Roelandt donated part of his legacy to the Royal Academy of Antwerp. His partner, Lydia Van Loock decided along with the Academy to preserve the artist's entire oeuvre as a research platform on the artist and performance art in Belgium and to donate it, in turn, to the M HKA.  The latter also turned its attention to the work of journalist, essayist, painter, draughtsman, performer and conceptual artist Jef Lambrecht and was able to acquire some of his reference works by donation.

In 2017, the collection was promptly enhanced with national reference artists who can be situated in an international avant-garde context. Of Jef Geys, the museum bought Zwarte Overall (Black Overalls 1991), in which the artist poses in a black overalls, holding a star. The star appears as a theme in several of Geys' works. The artist takes a special interest in the strength, meaning and symbolism of this universal figure. Philippe Van Snick donated the installation Ping Pong (1972) on the occasion of the collection presentation Ping Pong Revisited, in which he presented his palette of ten colours and the contrast between day and night - themes that were not yet present in his oeuvre at the time - in order to update the work from the 1970s. In 2017, M HKA firmed up the purchase of a large and long-term project by artist Danny Devos. Since the mid-1980s, Danny Devos had been exchanging letters with convicted serial killers in order to understand their motives. The Jockel project is a key work in Devos' oeuvre because the different aspects of his practice come together here. The framed letters refer to his correspondence. The four performances on the spot where the four victims were murdered, connect his body art and performances with the project. The objects refer to his sculptures and installations.

Works of art have also acquired been from recent artists who have built on the avant-garde tradition, with a donation from Narcisse Tordoir's work by Eindhoven University of Technology in 2017, and a number of acquisitions from fledgling, remarkable artists in the collection profile, including Marie-Jullia Bollansée, Gerard Herman, Nico Dockx, Tinka Pittoors and Rein Dufait.

In 2017, the museum was able to expand its collection with a number of visual reference works. For example, a generous donation from the Estate supplemented the Allan Sekula core ensemble with exhibition copies of 12 photographic works. Two works were acquired from Peter Wächtler, who links pop culture, bestsellers, tearjerkers and blockbusters to a genuine concern for the fragility of daily living. He creates works that straddle reality and the bizarre. He tells his stories in various media: film, text, ceramics, sculpture, charcoal and pen drawings, as well as sound.

Through earlier involvement in various movements, M HKA built up a substantial art collection from the former Soviet Union, which can be used meaningfully within a Eurasian perspective. In 2017, the collection was expanded with some acquisitions by artists from the Moscow art scene, including a film and a series of collages by Evgeny Granilschikov. A number of video works by the video and new media artist Sasha Pirogova were acquired through the partnership with the Moscow V-A-C Foundation. In 2012, she won an award at the Extra Short Film Festival (ESF); in 2013, she was selected for the Kandinsky Prize and in 2014, she won the Innovation Prize with her short film Biblimlen. In 2017, as a provisional highlight, she was allowed to represent Russia at the Venice Biennale (together with Grisha Bruskin and the Recycle group). Pirogova combines choreography, dance and performance in short films and video montages.

Moreover, in 2017, the museum made a number of bargain purchases from artists in whose scenes the M HKA takes an active interest and from referential artists from elsewhere that fit in with this collection perspective. Evgeniy Antufiev is one of these rising stars in the firmament. He is originally from Tuva, a republic belonging to the Russian Federation, located in the centre of Asia. Antufiev makes visually very diverse work that rehashes ethnic and folkloric traditions as dynamic opportunities. Last year, he held a retrospective exhibition in the Museum of Modern Art in Moscow. With the support of the V-A-C foundation, M HKA managed to acquire the most salient works, with a series of works around the legendary ballerina Anna Pavlova, including a series of porcelain versions of the meringue dessert named after her. In addition to this installation, the artist donated a collection of postcards from the romantic forest tomb of the Russian writer Count Leo Tolstoy, together with a video work he made of a recent reunion of the Tolstoy family on the ancestral estate. The museum acquired two video installations from Aslan Gaisumov, from Grozny. Gaisumov is working on an oeuvre that is sustained by personal and collective memory and that, at the same time, transforms and transcends this. His works are a mix between visual directness and social commentary, between what is fleeting and monumental. Usually, the videos and installations contain random objects that he deliberately makes.

As far as Ukraine is concerned, the continued commitment to a younger generation made it possible to secure the core collection from the former Soviet Union in 2017. Alevtina Kakhidze donated all her videos All Times News, which she broadcast daily from the VDNKH pavilion during the Moscow Biennale in 2015. At midday, Future News was broadcast, in which only forecasts were discussed. In the afternoon, Present News covered facts that happened at that moment in the VDNKh. Past News transmitted at night was based on a text about Strawberry Andreevna, who lives in Zhdanovka, a small town in north-east Donetsk where some of the fiercest battles during the war in 2014 took place. Two sets of drawings were purchased from Nikita Kadan. Through his work, Kadan attempts to map the eventful and, above all, violent history of his people, his country and, by extension, the whole of the former Soviet Union. Kadan, who attended monumental art courses at the National Academy of Fine Art in Kiev, enjoys working across borders and disciplines. He draws, paints and makes installations - often in collaboration with architects, human rights activists and sociologists - and always with his eyes on the dark side of the past. Although there is often no splash of blood to be seen, he paints an accurate picture of all forms of oppression, torture and other excesses of misplaced patriotism.

On the occasion of the group exhibition 'Een tijdelijk toekomstinstituut’ (A temporary institute for the future), some thirty drawings were acquired of Izmail Efimov, currently living in the Republic of Mari El. While this artist embraced social realism in the mid-1970s, he is now one of the most original ethno-futurist artists. This term was coined in in Estonia the 1980s. In the 1990s, the Finno-Ugric regions of European Russia adopted this term to identify a new cultural movement, 'leaning on the past, working for the future'. Alexander Lee donated The Botanical Factory III, a series of prints made together with visitors by printing on textiles with breadfruit leaves. The Congolese artist Jean Katambayi also donated parts of the collection shown in this exhibition, as did Kasper Bosmans with some of his murals. The campaign image for this exhibition, which he designed and in which Jim Dator's 'four futures' - continued growth, collapse, discipline, transformation - are translated into a visual language that is both visible and readable, was purchased.

Other additions to the collection include works by Liliane Vertessen, Guillaume Bijl, Angel Vergara, Edith Dekyndt, Anne-Mie Van Kerckhoven and Patrick Van Caeckenberg. In addition, the museum acquired a number of smaller works, editions and multiples from various artists. 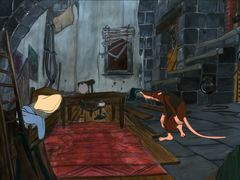 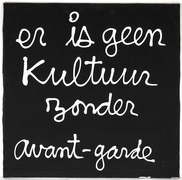 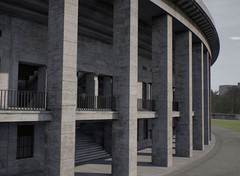 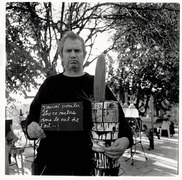 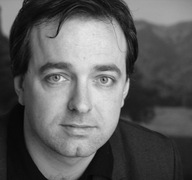 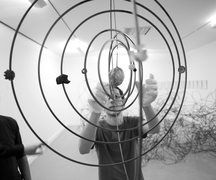