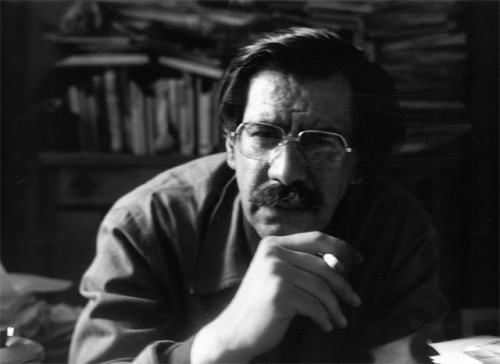 Christian Dotremont was Belgian poet and energetic cultural figure who is probably best known as one of the founders of the experimental art group, COBRA. Dotremont was influenced by late 1930s Belgian Surrealism. While in Paris during World War II, he cofounded the group La Main à Plume, coedited its publication, and began his own textual experiments. He returned to Belgium after the war, and he helped keep Surrealism alive there in such publications as Le Ciel Bleu (The Blue Sky). With the establishment of COBRA, which is known chiefly as a visual arts phenomenon, Dotremont began a private quest for a pure, transcendent poetry. This led to his invention of “logograms,” in which he sought to create a new “visual grammar,” a “poem-landscape.” Binary oppositions abound in his work: mystical-scientific, primal-futuristic, inner-outer, silent-sonic, intellectual-emotional. COBRA also furthered Dotremont’s friendship with the Danish painter Asger Jorn and cemented his links with Scandinavia. In 1951 Dotremont became ill with tuberculosis, the disease that eventually caused his death. While recovering from his first bout in Denmark, he wrote an autobiographical novel, La Pierre et l’oreiller (1955; The Stone and the Pillow). In such works as Digue (1959; Dike) and Moi, qui j’avais (1961; I, Who I Had) Dotremont continued his experiments with the systematic destabilization of language, which culminated in Logogrammes I & II (1964–65), Logbook (1974), and Traces (1980, posthumously published).