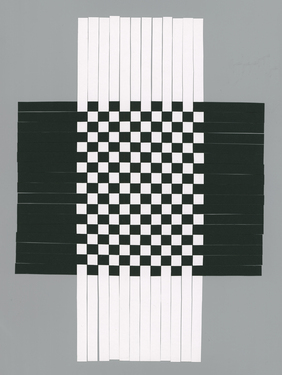 René Heyvaert worked as an architect in Ghent and the USA prior to the late-1960's when starting to devote himself exclusively to visual art.  And it was only in the years after his death, in 1984, that his work became known to a wider circle of art lovers.

For Heyvaert, the making of art was a way of escaping from physical and mental difficulties brought on by protracted illness.  On the one hand his work obsessively examines his own relationship to reality, while on the other hand we may also view his oeuvre as a kind of meditation.  Working slowly and precisely, the artist indeed comes to some manner of rest.

The oeuvre of René Heyvaert is marked by a sober and minimalist visual language.  Whether it takes the form of colorful lines and geometric patterns on squared paper, pencil on paper, perforated or plaited paper, the work always communicates the 'desperate' (trans)action in a direct way.  For him, this act is in itself of equal importance as the resulting artifact.

The unusual and deceptive simplicity of his work focuses attention on the material.  Using abstract, geometric forms and patterns, he makes collage-like paper braided works.  By this braiding process, Heyvaert indeed succeeds in making 3-dimensional works from paper.  In this way, he attempts to dissolve the border between drawing and object.  He sees drawings not just as objects but, conversely, he also sees objects as drawings in space.