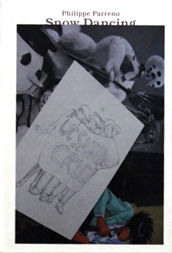 In late 1994 Philippe Parreno dictated to Liam Gillick and Jack Wendler a fantastical description of a party that had not yet occured. Snow Dancing, published in 1995 by GW Press and long out of print, is a record of his original conversation and the party it described. At the Consortium in Dijon two months later, hundreds of people were invited to participate in a promotional event that played out Parreno’s earlier description. The party lasted one hour and a half hours, exactly as long as it had taken to narrate it – and about as long as it will take you to read this book.

During the event prior to the inauguration, visitors could get a special pair of shoes with carved soles. Wearing those shoes, they had access to a space whose floor was covered with smooth material, on which the soles were printing words. Afterwards, the footprints were casted in glass. These transparent objects are like the ghosts of past exhibitions held in other places and come to haunt a space without a history which will literally be discovered through them.

"Snow Dancing (1995) started with the publication of a book in which I described a promotional event, a kind of party or festival. The reading time of the text was about the same as the event itself. So the book was a score that was performed in Le Consortium in Dijon. I transformed the exhibition space that hosted the party, and this time-based architecture became the exhibition - people were invited to visit an architecture produced by a party. So the book was a score that produced a space." 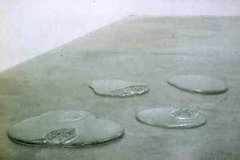 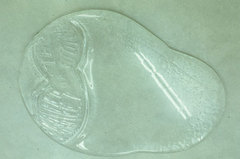 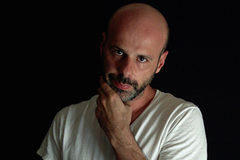