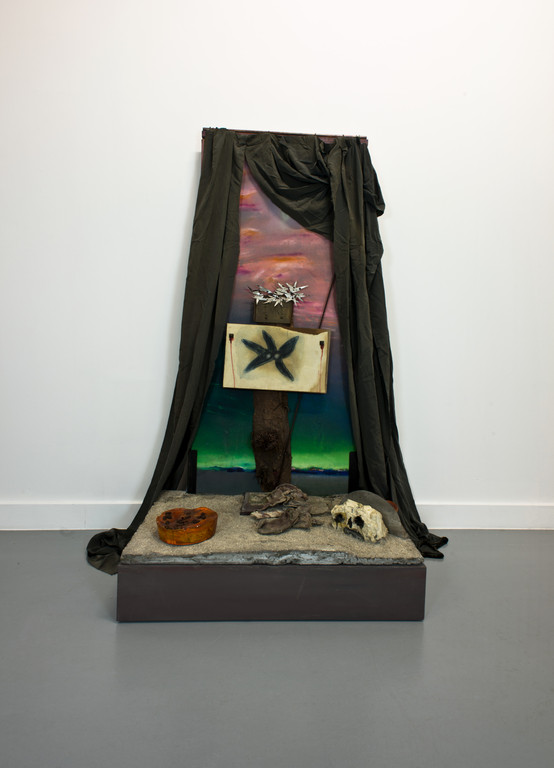 In 1979 Jan Cox travels to Israel and there comes into contact with Arab culture.  He keeps a diary where he records his impressions and thoughts, and also composes some letters to friends back home.  From one such to Adriaan Raemdonck: “…it's Israel, but an Arabic world.  The mosques dominate the Wailing Wall […] one feels quite clearly that the Jewish word is artificially implanted upon the Arabic.  The land is Arabic, forcefully modeled by the Jews.  It remains an Arabic land occupied by the Jews; 2000 years is too much."

There, Jan Cox confronts his Jewish-Christian background with the Arabic society, and refers in his sculpture Golgotha to Mt. Calvary where Christ was crucified.  He further notes: “… it's a farewell to a world become Christian, unforeseen.  Revelation [of an] Arabic world.  My Golgotha and fetishism, […] with the luck of having begun with almost nothing and then just finding the one symbol (fetish) after another until it seemed complete.  But it must become humanly individualized in Christ."

This journey paralyzed Jan Cox with a deep-seated fear of a resurgence of fascism or totalitarianism.  A fear, or 'pressure of reality', against which he was unable to cope.  In the night of 7-8 October, Jan Cox put an end to his own life.