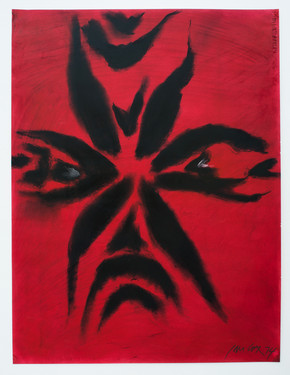 Following the Iliad-cycle, where Cox sets violence and thoughts of revenge as central motifs, in 1976 he begins a complimentary series inspired by Mozart's 'masonic' opera The Magic Flute.  The adagio states Sei standhaft, duldsam und verschwiegen, ‘be steadfast, forbearing and discrete': to elevate man by having him long for love and freedom, encouraging him to human excellence and justice as weapons against the blind madness and violence that have brought unhappiness and misery to so-many generations.  For this project, however, Cox only made a few sketches and paintings: Monastatos, Papageno, and Sarastro.

Given Cox’s humanistic and herein contained dualistic vision of life, it is hardly surprising that he chooses the characters of Monastatos and Papageno as subjects.  These figures are each others mirror-image and have more in common than one might suspect.  First, each is a sort of einzelgänger (loner), whom on the basis of outer appearance are outsiders in the world they find themselves in.  For that matter, the name Monastatos is derived from the Greek ‘mono-statos’, that may be taken to mean 'the stand-aloner', 'the isolated one'.  In Mozart's opera, the Moor Monastatos is traditionally represented as an evil villain completely given over to unbound libidinous impulses.  He is introduced as controller of the abducted beauty Pamina, whom he is beholden to protect, but - against any modicum of decency - covets to have his lustful way fulfilled.

On the other hand, Papageno – who also symbolizes the animal in man, is a merry 'natural man', driven by primary instincts such as eating, drinking, sleeping and pursuing the opposite sex.  Papageno is as one with nature, living autonomously and in full harmony.  From this perspective, both figures stand for the carnal, less-developed side of man, mainly operating according to primal drives and not much given to reason.  And here, Monastatos embodies the rather dark and the destructive; Papageno, the vitality of life's force.

In Monastatos, Cox evokes a threatening atmosphere with hellish coloring and an aggressive execution of line, while with Papageno we have the lyrical and the organic, a personage enveloped by the innocence and sympathy of a botanical flush. 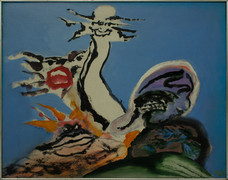 06 May 2014 - 01 June 2014.
M HKA is an important ensemble richer with the addition of works by Jan Cox, co-founder of the Jeune Peinture Belge group, akin to Cobra, and 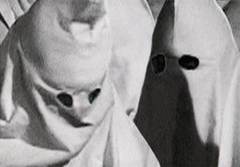 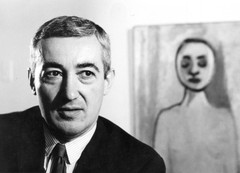