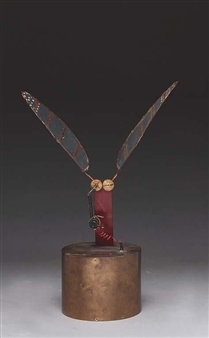 The fact that the experiments undertaken by Panamarenko to imitate insect flight were particularly innovative, is something he proved during the '70s and '80s with his Meganeudons, Chisto’s and Umbilly's.  To mimic the vibrational motion of insect wings, he makes use of a torsion-rod as drive-mechanism to allow the wings to vibrate and/or snap shut.  Ingenious as this was, it long remained uncertain as to whether there really were insects that actually propelled themselves according to this vibratory mechanism as envisioned and developed by Panamarenko.  After his exhibition in 1977-'78 in Eindhoven's Van Abbemuseum, where among other things the Umbilly I was for the first time put on view, Prof. Charles Hirsch shows the artist a scientific article pointing to an insect apparently having just such a mechanism.  Panamarenko was triumphant: 'I had imagined the principle of that vibrating and snapping-shut sort of wing much earlier, but science had never built this sort of system.  I knew it had to be a spring system, because otherwise the wings would simply break off.  Real insects have to do that too.  It's not like they fly just by flapping their wings any old way like we might do with our arms!  This sort of insect has a mechanism that works automatically, that is instinctive...'

The insect's name is Encarsia formosa, a parasitic wasp which near-exclusively exists as tiny female examples around 0.6 mm. in length. This insect is an ideal biological pesticide against whitefly, a typical greenhouse pest that endangers many plant varieties. In 1987, Panamarenko gives the name of this parasitoid to an object with two transparent wings driven by an electric motor. The object was made in an edition of fifty examples, and offered as a corporate gift by the Belgian Banking Association. Panamarenko built a round base (as a kind of piggy bank!) upon which he mounted the wings of the Encarsia-Formosa. When a coin is dropped into the slot, the mechanism starts and the wings begin to flutter.

'In any case, that piece proves that my mechanism's a valid one, because such an insect really does exist!' - Panamarenko