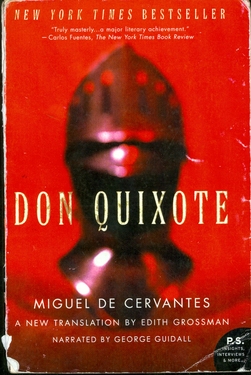 This book was generated by processing the Audiobook version of Don Quixote (Edith Grossman's 2003 translation) through speech recognition software. For this software to work it must first be trained using a very particular script to understand an individual's voice – in this instance, the narrator of the audiobook, George Guidall. To accomplish this, the words in the training script were found within the Grossman book version. These words were then located on the corresponding audio CD, removed from their contexts and rearranged as if George Guidall was speaking the training script. After the audio files for the training speech were completed, this constructed reading was played to the speech recognition software, effectively training the computer to learn the voice of George Guidall. With this in place, the speech recognition software was ready to hear Guidall's reading of Cervantes' book. The constructed voice of Guidall did not make for a perfect cypher. Often, Guidall used different voices for characters or Guidall ran words together – not necessarily enunciating each word to its fullest, throwing off the accuracy of the software. At other times, words such as 'Don Quixote' were unknown to the software's built-in dictionary and came out differently, in certain instances, as 'Donkey vote.' Further, much of the text reads like a Joycean stream, as the speech recognition software could not decipher the silent punctuation of the audio source. This generated text was then culled and printed as a book, closely resembling the standard paperback edition of the 2003 Grossman translation.

Beyond Don Quixote's obvious canonical importance as the first modern novel, the story itself is about books and reading; seen through plays with meta-narratives, questions of authorship, and the book as an object of fetish. Like the novel, this new version is also preoccupied with these and many other subjects, including the exploration of the differences in reception between the act of both reading and listening. Gareth Long’s work, generally, centres on processes of transference, translation and collaboration as a means to question authorship and the mechanisms of cultural and knowledge production. In much of his previous work, he has explored the cross-translation of artistic forms, non-linear narrative tropes and gestures de-stabilizing medium specificity. Frequently, these explorations lead to a revised understanding of Modernism as it relates to artistic and literary traditions and the history of design, particularly book publishing. 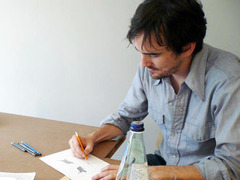