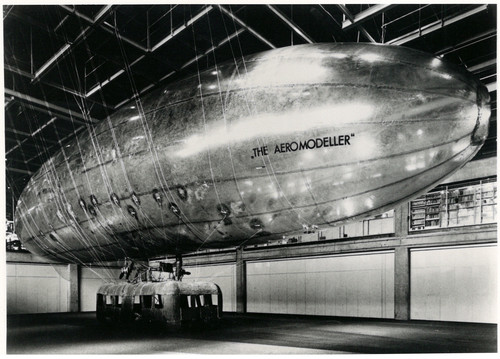 'I was looking for a good name, and I was visiting Martin and Mia Visser in Bergeijk, together with Richard Long.  We were talking about that magazine, that sometimes there was something good in there, and so forth.  And then Richard Long said: "Well, why don't you just call your airship The Aeromodeller?"  And that was that.'  - Panamarenko

Panamarenko built The Aeromodeller, the airship that speaks most to the imagination, between 1969 and 1971. The dirigible is the embodiment of the artist’s dream of being able to move freely through the air at any time. The basketwork gondola was designed as a living space. Two aircraft engines on top of it are used to steer the imposing airship, which is held aloft by a cigar-shaped balloon, thirty metres long. Panamarenko tested the airworthiness of his dirigible in 1971 in a field belonging to the artist Jef Geys in Balen. The plan was then to fly it to an arts festival in Sonsbeek in the Netherlands. The Dutch aviation authorities sent Panamarenko a telegram, however, banning the flight. To make matters worse, a storm blew up over Balen, causing the attempted take-off to fail. The Aeromodeller has since become the iconic work in Panamarenko’s oeuvre. In the decades that followed, he built numerous variations and prototypes of airships, each with a different form, colours and proportions. 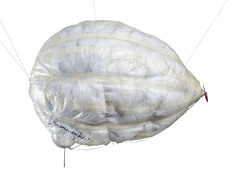 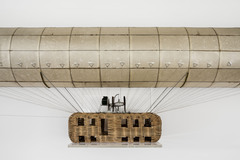