Sanatorium Pod Klepsydra (Sanatorium Under The Sign of the Hourglass), 1957 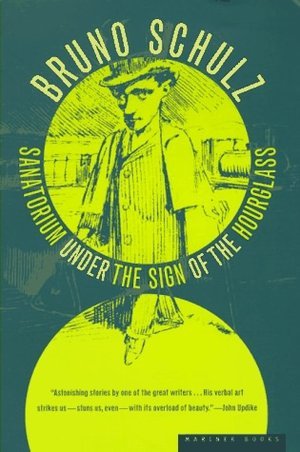 The novel takes the form of a collection of dreamlike, poetic short stories that reflect on the death of the narrator's father, as well as life in the modest Jewish quarter of Drohobycz, the provincial town in the Austro-Hungarian Empire where Schulz was born. The hourglass of the title refers to the use of this object as a symbol in obituaries and death notices among the Poles. In Father's Last Escape, the concluding story of the novel, Schulz makes an explicit reference to Franz Kafka's The Metamorphosis (Schulz helped his one-time fiancée translate Kafka's The Trial into Polish, a translation for which Schulz provided an introduction). The old man's business has been liquidated and all his functions and authorities taken over by wife or relatives. Even the pretty, young Polish maid Adela has gone and been replaced by Genya, "anemic, pale, and boneless,… and so absent-minded that she sometimes made a white sauce from old letters and invoices". Father's response is to turn himself first into wallpaper, then a piece of clothing, and finally into a big crablike insect who —unlike Kafka's passive victim— runs around the house, searching endlessly for something. His wife can catch the creature in her handkerchief sometimes, but cannot hold him. One day, however, she must have managed because Father appears at lunch, as the main course, after which he escapes the table, never to be seen again.

Schulz supplied illustrations for the publication of Sanatorium Under the Sign of the Hourglass, which he created especially for the book.

Theme: Childhood, States of the Self.