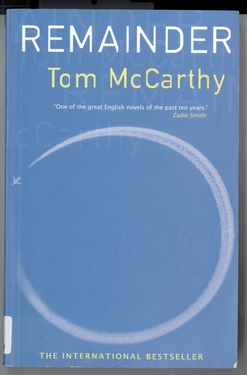 Traumatised by an accident which 'involved something falling from the sky' and leaves him eight and a half million pounds richer but hopelessly estranged from the world around him, Remainder's hero spends his time and money obsessively reconstructing and re-enacting vaguely remembered scenes and situations from his past: a large building with piano music in the distance, the familiar smells and sounds of liver frying and spluttering, lethargic cats lounging on roofs until they tumble off them...But when this fails to quench his thirst for authenticity, he starts reconstructing more and more violent events, including holdups and shoot-outs. Remainder is a darkly comic meditation on memory, identity and history.

This edition was preceded by a very scarce edition published in 2005 by the Metronome Press in Paris. The activity of Metronome Press was the publication of fiction written by artists in the shape of a paperback series. After becoming a cult hit championed first by British webzines (it was 3:AM Magazine’s Book of the Year for 2005) and then by the literary press, Remainder was republished by Alma Books in the UK (2006) and Vintage in the US (2007). A French version is to be followed by editions in Japanese, Korean, Greek, Spanish and Croatian. Tom McCarthy’s ongoing project the International Necronautical Society (INS) is a semi-fictitious avant-garde network that surfaces through publications, proclamations, denunciations and live events. In clear connection to Remainder’s central ideas, we can read in INS Declaration on Inauthenticity (2007): “The Statement navigates a course from the individual, to the dividual, thence to the residual, “a remainder that remains: a shard, a leftover, a trace”, and further to the risidual, a laughable doubling. “What distinguishes the poet or philosopher from others”, the Statement says, “is that he can laugh at himself. That is, he can simultaneously be the one who trips and the one who watches the trip: he can split himself in two — what Baudelaire calls dédoublement”.