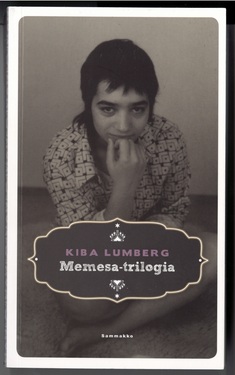 Literary synopsis *Memesa Trilogy* is the first depiction of Roma culture that is written from the perspective of a Finnish Romani woman. It is exciting and touching story about a girl, her growth and release from the suffocating chains of the community that she was born into. Feisty Memesa transforms into an artist, who stands against her community and the prejudices of society. Lumberg’s trilogy contains the works *Black butterfly* (Musta perhonen), *Tattered Wings* (Repaleiset siivet) and *Velvet Night* (Samettiyö). *Black Butterfly* is a tough and emotional story of a young girl’s growth in a Romani community. Families, sexes, majority population and Romani community create the tensions of the story. Kiba Lumberg’s awaited second novel *Tattered Wings* is an independent sequel to her first book *Black Butterfly*. Young Romani girl flees from her community’s oppressive rules and confronts the white majority’s prejudice. In children home and drug gangs of the 70’s Lappeenranta, Memesa experiences the seamy side of life. She is trying to find her own place and searches her sexual identity in the midst of majority population. The story of Memesa, a girl who cuts off her Roman roots, culminates in *Velvet night*, the last book of the trilogy, which is also an independent work. A young woman searching for herself turns into a recognized artist, supported by her godmother and an exotic and strong-willed dancer Zaida. Kiba Lumberg tells her story in a colorful way standing at the forefront of human rights defenders. Relation of the novel to the artist’s practice Writing is part of Kiba Lumberg’s larger artistic activity, which consists of installations, films, videos and visual art, among others. Lumberg thinks that “writing must be given a special kind of time compared to other arts, for literature is an art that emanates from the silence. Words can create various sentiments and through them, it is possible to enter different times: the past, the present and the distant future that is not yet known. Literature reflects the awareness of humanity. Therefore, it is sometimes hard to seize the pen. Literature has a long history. It can also deal with difficult issues, such as minorities and those discriminated. Artists' mission is to address these deficiencies and to bring them up, not to mention writing on joy, laughter and love. I believe that through art and literature, it is possible to change the world. I try to work as an artist, who is enabling different artists’ encounters and cooperation, regardless of their field of art. I think it is important that artists discuss with each other and enthusiastically engage in creating together.” [Artist Site](http://www.kibalumberg.fi)