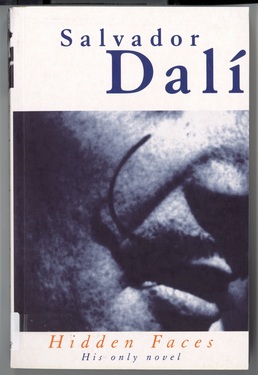 Hidden Faces (1944, first edition) is Dali's only novel. In richly visual language Dali describes the lives and loves of a group of aristocratic characters who, in their beauty, luxury, and extravagance, symbolize the decadent Europe of the 1930s. The Comte de Grainsalles and Solange de Cladel pursue an awkward love affair, but property transactions, interwar political turmoil, the French Resistance, his marriage to another woman and her responsibilities as a landowner and businesswoman drive them apart. It is variously set in Paris, rural France, Casablanca in North Africa, and Palm Springs in the United States. Secondary characters include ageing widow Barbara Rogers, her bisexual daughter Veronica, Veronica's sometime female lover Betka, and Baba, a disfigured US fighter pilot. The novel concludes at the end of the Second World War, with Solange dying before Grainsalles can return to his former property and reunite with her. The story of the tangled lives of the protagonists, from the February riots of 1934 in Paris to the closing days of the war, is a brilliant vehicle for Dali's ideas, and an evocation of pre-war Europe. Valuable not only for Dali's own specially drawn illustrations, but also because it synthesizes all of the themes in Dali's art.

“Dalí makes a transposition from the values that are paramount in the plastic arts to those that belong to literary creation. For if it is true that Dali´s painting is figurative to the point of being photographic, and is in that sense ´old-fashioned´, his writing is above all enhanced by a stimulation of all the other senses - sound, smell, taste, touch - as well as by adumbrations of the ultra-sensory, the irrational, the spiritual and the interwoven in the warp and weft of human life as reflected in a hypersensitive consciousness.”