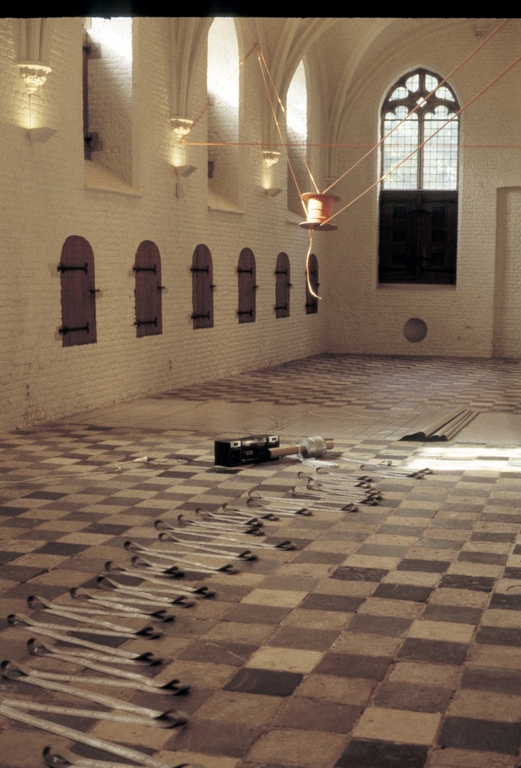 At the foundation of the installation We is OK from Eran Schaerf, is the artist’s own poem Zaun-Town. The text is composed from quotations, allusions and his own twists and turns; he lets it be read as a poem, as a philosophical treatise and as an autonomous work where metaphor has become reality. In his text Schaerf refers to figures including the political philosopher Hannah Arendt, architect Erich Mendelsohn and philosopher of language Ludwig Wittgenstein. The poem is painted on a 45 meter-long ribbon of sailcloth that, according to the spaces’ dimensions, can be rolled out in varying compositions. This written element of the installation is then mirrored by Schaerf in sound. The sail canvas from which the ribbon unrolls is printed with all kinds of quotes from pop songs, and these are played over a sound system. Moreover, the poem’s text where the ribbon stops is transposed in sound and translated into Dutch in the accompanying sound recording.

The opposition script-sound, reading-listening that is so created is typical of Schaerf’s work, regularly founded on the (un)intentional face-to-face confrontation of opposites and the resulting cognitive effect evoked by these contrasts. Schaerf use of his poem in We is OK was not its first apparition: it also appeared in his book Folding Public Plans (1994). This yen for recycling is also characteristic for Schaerf’s oeuvre, where elements of old installations regularly return in newer works. He offers earlier used ideas a new context in new work, and by so doing undermines the original meaning, while reminding the public of the instability of what we call reality.

>Dutch translation of the poem 'Zaun-Town' as published in De Witte Raaf, September 1994