The Rea(dy) Made of the Performance Money 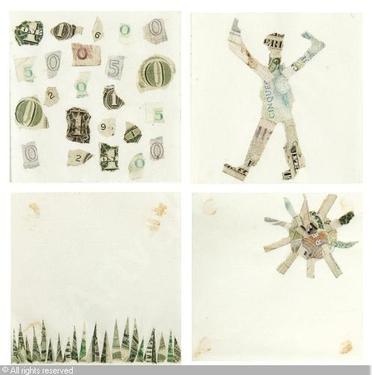 "In 1980 Jan Fabre creates a second performance about money, naming it 'The Rea(dy) Make of the Performance Money'. This time Fabre doesn't start with collecting money: instead he takes the chest containing the entry-fees on stage and uses it's contents. He counts the money followed by the audience. Again, Fabre presents himself as the consumer of money: he cuts into it, and places it under his table and chair as to pinpoint him covering the floor with it. But Fabre doesn't stop at the floor, he dresses himself with the money: he appears in a suit covered with it. De artist that expensively 'suits-up' on the spectators costs or the artist that declares that he has to make a living of art and claims that is the responsibility of the spectator to support his lifestyle. The artist as a leach, a beggar, or a whore even, it is up to the spectator the interpreted which one. Although Fabre has been asked multiple times to repeat his first money-performance, this remake wasn't a rerun. With this Fabre maintained the honors of the unique and once-in-a-lifetime character of the performance. He does let elements of the first performance reappear in the remake. Part of the 'The Rea(dy) Make of the Performance Money' was an exhibition of the remains of the performance: cut-up money, an aircraft folded from money and photographs and even some short films of the performance. The remains, carefully wrapped in plastic, Fabre places on the floor and with arrows made of money he formes a path through the exhibition. Afterwards he invites the audience to enter the stage and regard the exhibition. Fabre himself leaves the stage, leaving the audience alone in his theatre of memory. The object that most reveals the function of the remains is the in plastic wrapped film. It serves to recreate the past, otherwise it would have been played in front of the audience. The plastic elements are relics, objects that cary the moment of the event but at the same time mystify it." 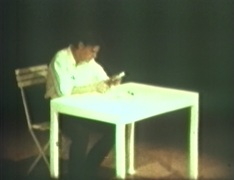