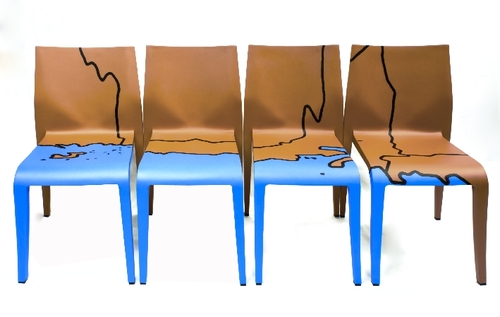 In 1994, Michelangelo Pistoletto writes the manifesto Progetto Arte: he argues for an art that is engaged with the wider world, and urges artists to think about the role they play in society and their responsibilities herein.  With his grand art-project Cittadellarte, Pistoletto has since 1996 been working to concretize these ideas in collaboration with other artists.

Pistoletto believes in art's potential of bringing together ever more disparate cultures, peoples, belief systems and individuals.  He also addresses various human activities and sectors such as the economy, religion, education and politics, aspiring to connect them via the medium of art.  In 2002 he began the project Love Difference – Artistic Movement for an InterMediterranean Politic, his aim being to encourage a closer rapprochement among countries and peoples of the Mediterranean basin.

The work Red Sea – Love Difference Chairs is a component of this project.  On four side-by-side placed chairs, we are presented with the outline of the Red Sea coast.  The sea acts here as metaphor for the bringing together of different cultures, in this way mediating between countries, languages, political ideas and religions.  In collaboration with Colombian artist Juan Sandoval, Pistoletto re-works an existing chair-type into something that balances on the borderline between art and design, between installation and functional object, between land and sea.  Upon these chairs, the border is meant not to divide but to unite.

02 July 2014 - 31 August 2014.
Under the umbrella term Visite, the M HKA – in collaboration with LOCUS, the hub for libraries, cultural and community centres and local cult

The City of Art 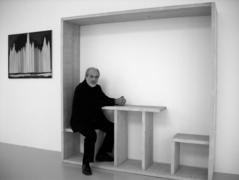