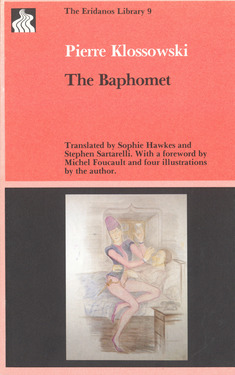 Le Baphomet, a singular, Walter Scott-inspired tale about the Knights Templar, is set, initially at least, at the beginning of the fourteenth century just before the dissolution of the Templar Order at the behest of the then French king, Philippe Le Bel. After the historical prologue the action is transferred to a seemingly atemporal sphere, where the disembodied souls of the former Knights Templar await the moment when the Last Judgment will be pronounced and they will be reunited once more with their earthly bodies. The setting, tone, and style are at first gothic, but with the appearance of the disembodied spirit of Saint Teresa of Avila baroque elements begin to dominate and to mix with evocations of Masonic and esoteric ritual, Gnostic heresy, and theological but also philosophical discussion. These are accompanied by the appearance of Philippe le Bel himself and the figure of Friedrich Nietzsche, the "Antichrist," initially in the form of an anteater.