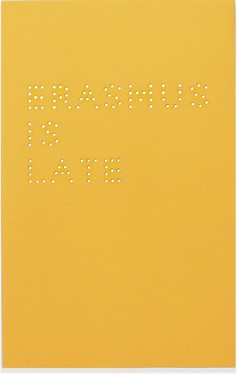 The central character of Erasmus is Late is Erasmus Darwin, opium-eater and brother of the more famous Charles who is indeed late. Late for a dinner party that he himself is giving and whose illustrious guests, already assembled around his table, include: Robert McNamara, Secretary of Defense under Kennedy; Masura Ibuka, co-founder of Sony; and Murry Wilson, father of Brian Wilson.

Whilst the guests wait, Erasmus dawdles through contemporary London becoming waylaid by different sites, which represent for Gillick, the development of free-thinking; Gillian Gillick, the artist’s mother, illustrates these sites with line drawings. Erasmus Darwin epitomises for Gillick the activity of free-thinking; a form of political pursuit dependent on wealth and leisure and problematic in its relationship to ‘unfree’ thought and the working classes.

On one level a guide to contemporary London seen through the eyes of a Georgian, Erasmus is Late is also an examination of pre-Marxist positions, an ill-researched investigation of a Utopian optimism that is struggling to predict the future.

Erasmus is Late originated from Liam Gillick's proposal to Book Works for the New Texts commission in 1994. The novel acted them as the fulcrum for a body of works that stemmed from it: Ibuka! (the production of a musical scenario that focuses on one of the key characters from the book Erasmus is Late); McNamara (a short cartoon film produced in London by a commercial animation company); an exhibition at Gallery Schipper & Krome, and so on.
Novel's website