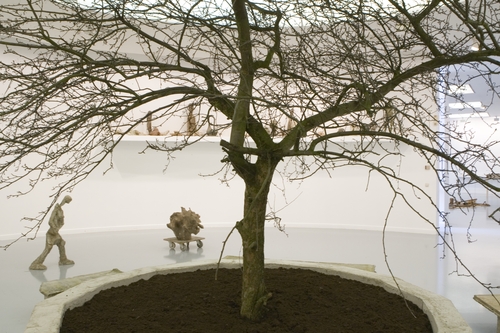 ‘Tagore has the capacity to make us think about our times through the filter of shattered ideals.' Indian cultural critic Rustom Barucha

Iniva presents a unique collaboration between artists Anna Boghiguian and Goshka Macuga centered on the work of one of India's most important figures of the early twentieth century, the poet and polymath Rabindrath Tagore.

This project features two quite unexpected responses to Tagore's legacy and suggests how his work and ideas still resonate for artists today. We see how Tagore's approach to art and culture as well as subjects including ecology, education, cosmopolitanism, nationalism, and the universal, compel our interest and demand to be translated into terms that reflect the contemporary world.

Taking Santiniketan, Tagore's school, university and utopian community in West Bengal, as a starting point, the two artists create installations that in different ways reflect this environment. Shown in separate galleries, the installations are conceived in relation to one another and will include several overlapping elements.

This exhibition will be the first time that Boghiguian has had a significant showing in the UK. She will premiere a new commission for Iniva, incorporating elements associated with Tagore, encountered during her frequent visits to Santiniketan. A small stage in the centre of the space will elicit Tagore's love of theatre and directly reference his allegorical play The Post Office. Volumes of Tagore's poetry, drama, literature, as well as essays on nationalism, internationalism, religion and education will be suspended from the ceiling alongside Boghiguian's own sketchbooks. A new series of the artist's drawings and embroidered pieces made at Santiniketan will be displayed respectively on shelves and a screen. The intuitive and expressionistic rendering of figures and use of text recall Tagore's own artworks produced later in his life.

Macuga will rework When was Modernism? (2008) an installation that evokes Kala Bhavan, the art college at Santiniketan, realised after a field trip there in 2006. With stone benches arranged around a tree, the piece echoes the outdoor campus of Santiniketan, while a display of discarded student test pieces can be seen as fragments from a little known history of modernism extending across different geographies and time periods. The continuity of materials and aesthetic allude to the school's early modernist roots in the 1920s and correspond with the formal exercises Macuga herself undertook as a student in Poland. 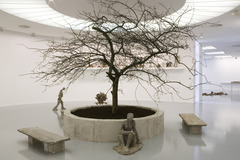 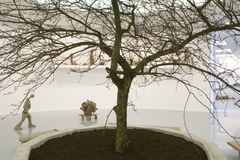 When was Modernism? - Goshka Macuga 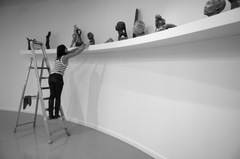