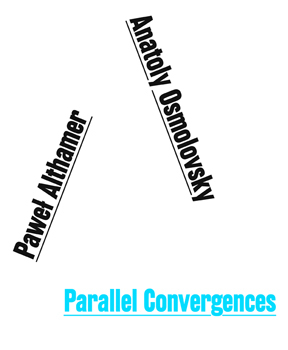 V-A-C Foundation, a not-for-profit Moscow-based institution committed to the international presentation, production and development of Russian contemporary art, is proud to present the exhibition Paweł Althamer and Anatoly Osmolovsky: Parallel Convergences. This unique project brings together for the first time the work of these artists—one Polish and the other Russian—both of whom are from the generation shaped by the decisive shift from communism to post-communism, experienced in Russia and the Eastern Bloc in the early 1990s, and whose work share many interesting parallels. The exhibition pairs Althamer with Osmolovsky in a fluid conversation that acknowledges the divergences between their works as well as the many similarities and overlaps. Despite the different forms and media they adopt—ranging from sculpture, installation and video, to more politically engaged actions and social forms of practice—the work of both artists often pivots around the idea of the body and modes of perception.

Paweł Althamer (b. 1967, Warsaw) will be represented by works that embody some of the main concerns tackled in his work: collaboration, self-portraiture and the centrality of subjective human experience. Althamer’s major video cycle So-called Waves and Other Phenomena of the Mind from 2003-4, an eight-screen installation of short films made in collaboration with the Polish artist Artur Zmijewski, will be shown in its entirety. The videos document Althamer’s experiments with an array of mind-altering substances, ranging from hashish, LSD and magic mushrooms to peyote and truth serum, while also exploring hypnosis and the varying psychological states engendered by all of these means. Althamer will also present a large-scale new bronze cast of the work Parys, which continues the investigation into monumental and statuesque depictions of the human body that has spanned his career.

Anatoly Osmolovsky (b. 1969, Moscow) will be considered in the exhibition by a survey of his work in all media dating from the early 1990s until now, most of which have seldom been seen outside Russia. Osmolovsky began his career in the (then) Soviet Union as a writer in the late 1980s and staged a series of confrontational political performances in Moscow as the leader of the E.T.I. (Экспроприация Территории Искусства – Art Territory Expropriation) movement. Most of his production in those years was characterised by collective participation, working closely with the members of the Radek Community, who saw art as a tool for protest. These important actions will be represented in the exhibition through a series of films and documentary photographs. In 1995, Osmolovsky founded Radek magazine, a Russian journal that put forward a politically radical and intellectually wide-ranging agenda. Osmolovsky’s move into sculpture over the last decade or so will be examined in the exhibition through a series of major works such as Hardware and Breads, which manifest his shift towards investigating the vexed legacy of both Russian icons and the early-twentieth century avant-garde. New works by Osmolovsky that have not previously been exhibited will be also presented.

Althamer and Osmolovsky will also collaborate together on a new sculptural work for the V-A-C exhibition, which will evolve through an exchange of ideas between the two artists.