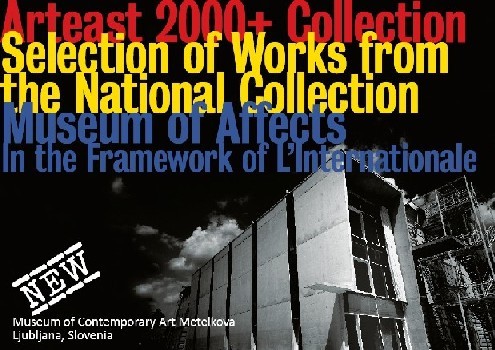 L'Internationale is a European joint venture between five museums and artists’ archives - Moderna Galerija Ljubljana, M HKA, Van Abbe Museum, Eindhoven, Barcelona MACBA, Julius Koller Society, Bratislava and Warsaw KwieKulik Archive – who exchange their collection pieces among each other. Unlike the powerful art institutions, which pursue ambitions of world domination, L'Internationale wants to be an alternative cooperation framework that achieves transnational and polyphonic accounts and give visibility to the mutual agreements that typify the different collections. In the first project, an innovative approach to the neo-avant-garde art from 1956-1986 is sought on the basis of various conferences and exhibitions.

In Museum of Affects, artworks were brought together that were created in very diverse conditions: under the totalitarian regimes of the former Soviet Union and Yugoslavia, under the dictatorship of Franco in Spain, under the dictatorship in which the 'public enemy' was murdered in Argentina, or the dictatorship where the latter was exiled in Brazil ... But also from the United States that enjoyed supremacy in the corresponding period in the arts, or in Western Europe, where the same United States was the big brother and role model. Nevertheless, there are - from this diversity - common values to be found in these works. Not the formal characteristics but the notion of ‘the intensities of a work of art’ was taken as a guideline: what was the intention of the artist when he created his work, what was important to him and what did he want to achieve?