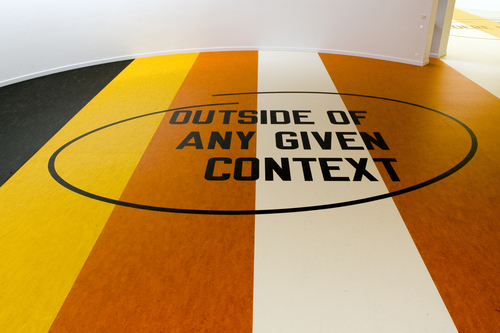 Lawrence Weiner: “You and I know each other fairly well. And you and I have conceived the plan of doing something together many times – and yet, it never happened …” Liam Gillick: “This is exactly what I find interesting.” – Liam Gillick and Lawrence Weiner, Between Artists, 2006

For over 20 years, the artists Liam Gillick and Lawrence Weiner based in New York, who each represent very different aspects of the conceptual, post-conceptual and neo-conceptual traditions within contemporary art, have been engaged in an intense intellectual and artistic dialogue. In one of the many conversations between the two artists which have been published in recent years, however, they notice how that dialogue still had not yielded any concrete artistic results. So the M HKA decided to invite the two artists to bring this dialogue in the form of a jointly conceived exhibition project.

The resulting artwork, which itself resembled a reflection on the possibilities and limitations of artistic collaboration as such, reacted directly to M HKA's immense, open exhibition space (around 1,600 square meters).

The project was based on a 'syntactic' synthesis of Gillick’s typical modernist idiom and sense of an aesthetic of 'application', on the one hand, and Weiner's well-known love of language as a sculptural medium, on the other. The unique spatial qualities of Gillick and Weiner A syntax of dependency resolutely ranked the horizontality of dialogic thinking above the verticality of hierarchical thinking, and in doing so, almost literally gave shape to our contemporary understanding of the cultural arena as a level playing field. 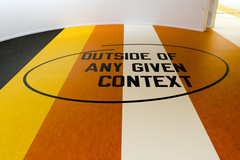 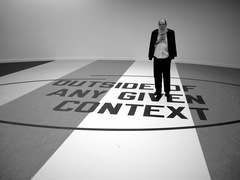