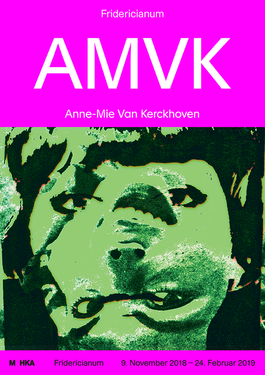 Anne-Mie Van Kerckhoven strategically uses her initials as if they were a global corporate brand. She consciously chooses the distanced anonymity for her work, which for more than 40 years has been fed by the cultural inventions of the underground. Graffiti-like drawings are just as much part of her work as shrill music and eccentric performances. AMVK contrasts the proliferation of technological progress and artificial intelligence with the timelessness of human sensations.

The starting point of Van Kerckhoven’s work was and remains the human brain, with its analytical and irrational possibilities of perception and cognition. She was born in 1951 in Antwerp, where she still lives and works. Her work has always been consistently interdisciplinary. She and her partner, the artist Danny Devos, founded the noise band Club Moral in Antwerp in 1981. It existed until 1991 and was revived in 2001. Since 1982, they have been publishing the magazine Force Mental together. Since 1977, AMVK has collaborated with the neuroscientist Luc Steels and since 1982 with his Laboratory for Artificial Intelligence (Brussels, today Paris). As a result, visual languages characterised by scientific imaging processes became prominent in her work: diagrams, graphic animations, text/image compositions. These and other collaborations have always been typical of Van Kerckhoven’s working method. For her, everything is based on a clear, even merciless commitment to the societal critique that her work seeks to articulate; here the child of 1968 ‘outs’ herself.

The artist herself explains her work in a manifesto: ‘In contrast to the arbitrariness in which the origin of written and spoken language lies, I have allowed the unspoken, the mystical to have its say. From despair to ecstasy – that is how far the field of the mystical reaches. This is the devouring lust for life and love. Unification, not detachment from the rest of the world. No ego, no boundaries. The created becomes one with the Creator.’ And further: ‘I call it the analogue. [...] The analogue is a ritual, a mystery, a longing, a desire, a lust – while the digital means control, technology, sublimation, dependence, reduction, transparency. The analogue and the digital together make up what constitutes man: Perspective.’ (Anne-Mie Van Kerckhoven, Some Sort of Manifesto, 2016–17)

In her early oeuvre rapid, seemingly improvised yet almost supernaturally precise line drawings played an important role. Van Kerckhoven studied graphic design in Antwerp in the 1970s. She sketched her surroundings with jagged scribbles and distorted them playfully and humorously into the grotesque. Later, large-format paintings were added, often in a pop-inspired reduction of colours and shapes, but also in combination with materials and pictorial levels otherwise considered alien to painting. The focus is often on the female body: this is the excessive self-observation of someone who thinks for herself within feminist awareness. In her videos and installations, Van Kerckhoven often uses her drawings, but also pictures of pin-up girls, alienating colours and collage techniques. Other films combine different views of an event. An ingenious relationship between text and image runs through the entire oeuvre; analogue and digital image worlds complement and contradict each other. Familiar formats of technological aesthetics – Plexiglas, computer graphics, professional prints – are used and at the same time charged with visual power by the fast, subjective and spontaneous gesture of overpainting and overdrawing.

Van Kerckhoven’s oeuvre is a large portfolio of works: drawings, prints, paintings, films and (video) installations. She has remained an influential, but also controversial, pioneer in Antwerp’s creative scene until today, and in this role she is now also internationally evaluated and appreciated. The current exhibition in Kassel concludes an exhibition tour that had already brought her ouevre to two institutions in Germany (Museum Abteiberg Mönchengladbach and Kunstverein Hannover) and one in Belgium (M HKA, Museum of Contemporary Art Antwerp). Each presentation had unfolded its own visual life. Anders Kreuger, Senior Curator at the M HKA, who is familiar with Van Kerckhoven’s work, regards the exhibition at Fridericianum as the final installment of a trilogy: ‘If the exhibitions in Mönchengladbach and Hanover represented the “thesis” and were based on a series of twelve chapters allowing a comprehensive view of AMVK’s intellectual biography, the later station in Antwerp was the “antithesis” entirely based on visual flow. In Kassel, as a conclusion, the spatial narrative is resurrected in a kind of Hegelian dialectical “synthesis”.’ 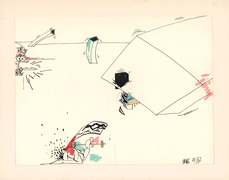 Vrouw doet in broek van b... 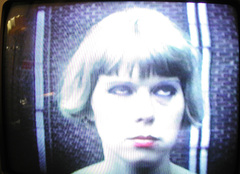