From 1976 onwards, De Vree developed his ‘smoking technique’, so-called ‘smoke designs’, enabling him to draw figures in the black soot residue of a candle’s flame on paper. The first work with this technique is titled “Burns” (1976), a series of one poem and 6 drawings.

In this series of visual poems, De Vree writes the names of violence-stricken cities like Prague, Belfast, Beirut, Santiago, Soweto and Cape Town like a serial grid wide over the image plane, and by burning holes in the page representing the destruction of these cities. The grid with the cities functions as a background for what is depictured, and symbolize many events and evolutions that are at issue since the second half of the twentieth century.

“Burns” is an expression of social discontent. After May 1968, after the Vietnam-debacle, the decolonization of the Third World, the oil crisis and economic recession, the possibility of civil peace seems far away. Modern man is alienated and detached from clear societal models and moral ideals. Life in the city is seen as a kind of endless guerilla warfare, where the normal structure of civil consultation fails, and the struggle for emancipation of citizens requires a different attitude towards the state apparatus. On the other hand, De Vree also points out that revolutionary tendencies are abused and often accompanied by political and religious fanaticism, as in the Middle East, Northern Ireland, Pakistan, or Italy.

The Street Tells the Truth 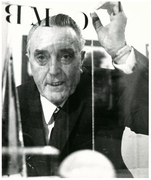