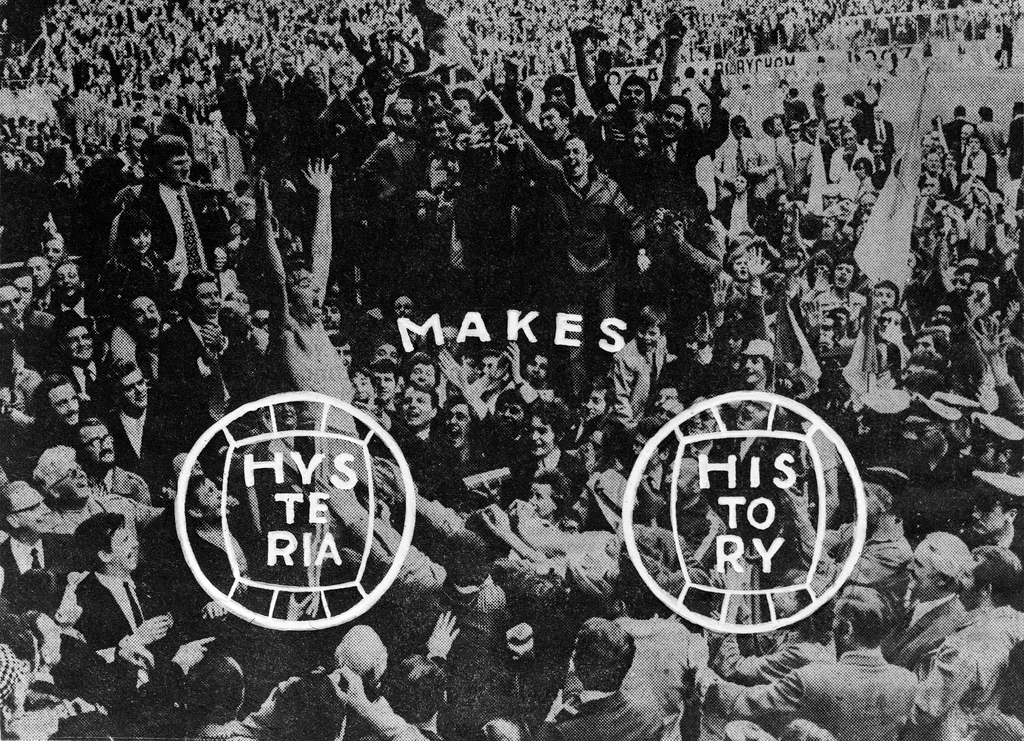 After 1967, De Vree’s poetry became increasingly engaged and critical of society. In 1971, together with the Italian poet Sarenco, he founded the review Lotta poetica, which became the centre of the international poesia visiva movement. Poesia visiva is the equivalent of visual poetry, but the term encompasses several dimensions. The term ‘vision’ can easily be derived from the term visiva, whereby the engaged character of this poetry already becomes clear. Besides social criticism, poesia visiva is also characterised by the use of photographic material drawn from advertising and journalism. This visual component is also expressed in the term. Poesia visiva is a continuation of the concrete-visual poetry in which the poet seeks to expand the concept of poetry over and beyond the limitations and means of expression that were common until then and were specific to the discipline, and which contains social criticism. In his poesia visiva De Vree continues to make use of the techniques of both concrete poetry and visual poetry. After 1971, however, the use of photography predominates in works on canvas and silk-screen prints. Photographic materials are generally incorporated into these poems in the form of collages or montages, occasionally accompanied by an ironic or satirical commentary that aims to address the viewer’s conscience and awareness by means of all sorts of associations. Through his biting and at times cynical observations, De Vree attempts to demystify the encoding of the constant stream of information and to rectify the manipulated message of the ‘mass media’ when the abuse of power gives rise to mechanisms limiting individual freedoms. For this purpose he generally resorts to familiar images and material taken from the media themselves which, to mask their sham values, are incorporated graphically and confronted textually with pithy and ironic comments. Thus De Vree uses his poesia visiva to warn against hypocrisy, degeneration and decadence, idolatry in sports, fashion, eroticism, and more. Conversely, these denunciations or comments are made topical through a recognition of the familiar pictures from the media. By pointing out the viewer’s lack of freedom, De Vree wishes to incite him to demand genuine freedom.