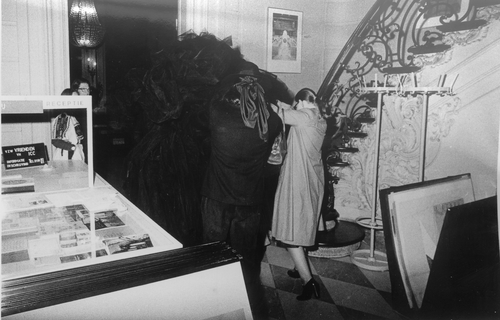 The ICC – the first public institution for contemporary art in Flanders – was set up by the Flemish Community in 1970 and emerged directly from the avant-garde dynamic of the artists of the 1960s. For ten years it was a focal point for the international and Belgian avant-garde, due in part to its video facilities. Although this was not its task, the ICC did nevertheless take an institutional approach; the documentation centre also formed the starting point for a collection. The M HKA resulted from the vicissitudes of the ICC and was heir to its heritage.

It was especially on the initiative of the director Florent Bex (1972-1983) that the centre assumed a contemporary and international dimension, and developed into an extremely dynamic place where artists and the public could get to know new art forms, particularly video art. He was a catalyst in this regard and not only made the ICC a venue for the latest national and international developments in this field, but also set up a video studio and video production centre. This enabled a young generation of Belgian artists (Jacques-Louis Nyst, Jacques Lennep, Guy Mees, Leo Copers, Danny Matthys, Jacques Lizène, Daniel Dewaele et al.) to experiment in the medium of video, which at that time was still in its infancy, while foreign artists also recorded tapes there. The ICC also documented its own events.

Among the group exhibitions there were ‘mapping’ exhibitions, in which the public was familiarised with international developments, and surveys, which presented snapshots of the state of affairs in contemporary art.

The ICC’s video archives, library and substantial documentation centre are currently administered by the M HKA.