Where Dogs Run is the name of an enthusiastic Russian artists’ collective from Yekaterinburg in the Urals, they use multimedia techniques for creating intellectual and slightly subversive, artistic statements, in the form of installations, videos and DIY packages.

This group, which could be called media artists, combines innovative visual techniques with scientific research instruments and low tech for creating hybrid installations that produce a form of artificial intelligence, which is also questioned at the same time. This intelligence is, however, consciously controlled and influenced, which immediately exposes their political and scientific suspicion. The creative collective, which was established in the year 2000, uses a broad scale of techniques (sound, video, installations, performances), with which they let their personal, idealistic ideas interact with empirical research and their bodily experiences, but also doctrines or mythological stories.

With an advanced imagination, they create pseudo-scientific installations, which are designed to expose the psychological and social mechanisms that, unnoticed, determine daily reality. This makes it possible for them to create an artificial world that wants to be futuristic and free, but which nevertheless remains inseparably connected to the demonic background of historic reality. The group consists of Vladislav Bulatov (°1975), Natalia Grekhova (°1976), Olga Inozemtseva (°1977) and Aleksey Korzukhin (°1973). 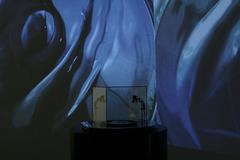 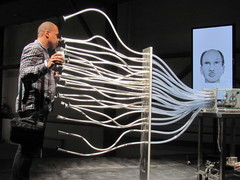 Evaporation of the Consti... 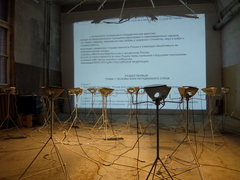 Dymphna is interwoven with Christianity, from her secret baptism by her confessor and confidant Gerebernus, to the care for the poor and need