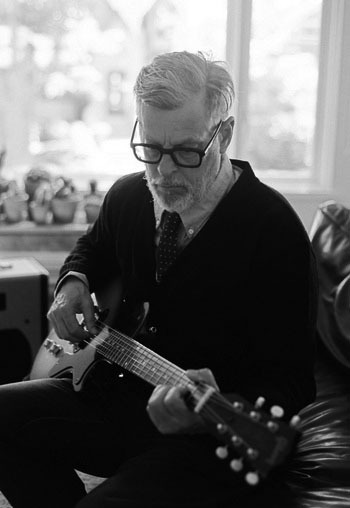 Rodney Graham is recognized for a rigorously intellectual art, which ranges from photography, film, video and music to sculpture, painting and books. Graham's work examines social and philosophical systems of thought, in particular those derived from the transition of the Enlightenment into Modernism. Underlying each work is an historical context, through which a complex narrative incorporates literary and philosophic references and visual puns. The work is essentially circular in structure and moves in seamless and infinite loops, such as the film trilogy Vexation Island (1997), How I Became a Ramblin' Man (1999), and City Self/Country Self (2001), where Graham impersonates fictional characters - respectively a castaway, a cowboy and a city dandy as well as its opposite, a country man – who are engaged in the endless repetition of fruitless actions and gestures, caught in the impossibility of reaching any meaningful conclusion. Borrowing from existing models, Graham constructs his own system, whose operating logic, often based in disorientation, the humorous and the absurd, deflects rather than reveals the key to their interpretation.

>Rodney Graham, Continuous Transformation of the Form of a Child's Sled into that of Another, 2000.Installation, paper, 20.5 x 14 x 2 cm.