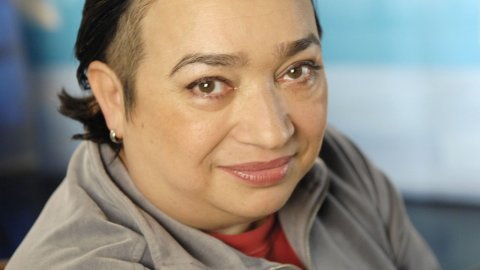 Kiba Lumberg is an artist who lives and works in Helsinki. She moved away from her family and cut off ties with Romani community at the age of 13. She has a private gallery in Kallio, Helsinki, which is working and exhibition space. Lumberg has written a Finnish TV series Dark and glowing blood (Tumma ja hehkuva veri) in 1997-1998 and a theater play of the same name, which was in Varkaus Theater repertoire in 2004. Lumberg’s first novel Black Butterfly attracted wide attention when it first appeared in 2004, and in the fall of 2006 the story was continued with an independent sequel, Tattered wings. In autumn 2008, trilogy was completed with Velvet night.

Lumberg took part in the 2007 Finnish parliamentary elections, as a Left Alliance candidate, and in EU elections in 2009. Lumberg has lectured for example in Venice, Italy, and several universities in Finland and also in the Parliament house in Helsinki. Besides writing and fine arts, Lumberg’s diverse artistic activities have included design and implementation of performances, composing, documentary videos and comic books. She has held over twenty solo exhibitions all over the Finland and she has had works for example in Venice Biennale in Italy and Rome Art pavilion in Paris, Prague and Brussels.