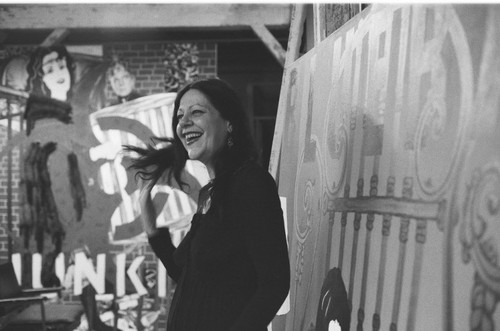 Lives in New York (US), lives in Amsterdam (NL).

Kathe Burkhart is an interdisciplinary artist and writer. Her visual art has been widely exhibited nationally and internationally, including the 1993 Venice Biennale, SMAK Museum (Gent, Belgium), Museum of Modern Art, Weatherspoon Museum, P.S. 1, Neuberger Museum, Banff Centre for the Arts (Canada), FlashArt Museum, Galleria d’ Arte Moderna, Bologna (Italy), and the Groningen and Helmond Museums (Netherlands), among others. In New York City she has had solo exhibitions at Participant Inc., Mitchell Algus Gallery, Schroeder Romero Gallery and Feature Inc., among others. Her work has received much critical attention. It appeared on the cover of Flashart in December 1990, and was the subject of leading article “Bad Girl Made Good”. Burkhart has received grants from Change, Arts International, Art Matters, and the Amsterdam Foundation for Fine Art, Design and Architecture. She is the author of three books of fiction, Between the Lines (Hachette Litteratures, 2006); Deux Poids, Deux Mesures (The Double Standard) (Hachette Litteratures, Paris, 2002 and Participant Press, 2005), and From Under the 8 Ball (LINE, 1985). She teaches art and feminist theory at New York University, and divides her time between New York and Amsterdam.

From under the 8-Ball