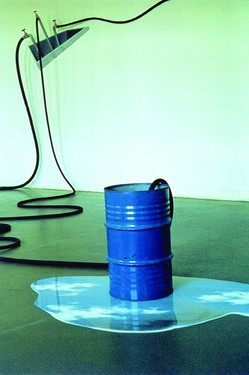 At the age of 12, he starts work: as an assistant at the workshop of Stephanos Almaliotis (for six years), as well as assisting at the workshop of Vangelis Faenos, where large-scale cinema posters were created.  From 1948 till 1954 he studies at the Athens School of Fine Arts, under Yannis Moralis. In 1957, he obtains a Greek state scholarship (IKY), and travels to Rome, where he studies fresco and encaustic at the Scuola delle Arti Ornamentali. He comes in contact with the contemporary Italian artists there and with the contemporary art scene of Europe and America in general. During this period, his work is characterised by an abstract gestural trend and the use of non-art materials such as cement, charcoal, hay etc.

Together with artists Vlassis Caniaris, Nikos Kessanlis, Dimitris Condos and Yiannis Gaitis, he creates Gruppo Sigma. In 1960 he moves to Paris where he stays for the next twenty years or so. In 1966 he creates the first ‘objects’, and incorporates the element of trompe l’oeil into his work. During the period 1970-75, he embodies in his work everyday objects (crumpled paper, newspapers) while in 1978 he creates his first Trees and a bit later his Seascapes, in which painted elements and real elements coexist. In 1985 he moves to Greece where he starts to experiment with video. From this period onwards he combines painting with video projection. From the Nineties onwards he creates monumental constructions and installations in which he also uses new mediums. 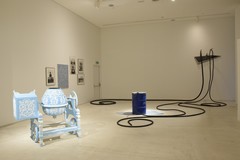 THE VIBRATING IMAGE This idea suddenly come into our minds when looking at works by Wim Delvoye and Costas Tsoclis, which we then combine