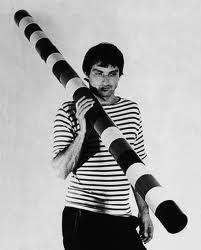 André (or Andrei) Cadere (1934-1978) was born in Poland, but grew up in Romania. During the sixties and seventies, he develops into an influential artist, who, gives colour to the international art scene, operating mainly from France.

His work is situated at the edge of the artistic space, it can be described as strategically peripheral work. It is both conceptual and concrete, while at the same time clearly delineated and minimalistic, but also endless and elusive as a spiritual perpetual mobile. Cadere bombards the artistic community with a wooden measuring instrument, as a mental reference point, as if "taking measure" of the traditional artistic reality. His bizarre wooden staff, usually referred to as a “barre de bois” - consists of painted components with a length equal to the diameter. These separate segments are organised in a systematic and logical order, which is based on the eight main colours of the light spectrum, plus black and white. The artist calls his coloured rods ‘endless paintings’. They can be compared to the stripes of Daniel Buren. Cadere uses his work to present a radical form of what is called ‘institutional criticism’.

Cadere appears uninvited alongside exhibitions of other artists, something that is not received with thanks. In a parasitic way, he infiltrates galleries and museums, hides away his coloured wooden staffs, thereby announcing the presentation of his work in parallel with the exhibition or opening of another artist, through which that opening always also becomes his. With his round barre de bois, he quickly becomes a recognisable silhouette at openings, with which he wishes to add a new dimension to the classic art discourse, namely that of artistic meditation and self-assessment – just like prayer beads – but also that of a serial challenge, which should stimulate the visitors to make an attempt at reconstructing the underlying logic.

The barre de bois is not an artistic instrument that only serves to be looked at; it can be understood as part of the rise of semiotics. Namely thinking about how meaning can be demonstrated and how it functions. The object acts as a reference to something else. Ultimately, Cadere produces endless variants of his extraordinary measuring rod, in different materials and in different proportions. The underlying idea, however, remains the same, which only confirms the stubborn power of his unasked intervention.